You are here: Home / NHL / Kings / Then, Along Came Jonathan Bernier 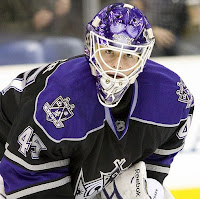 Heading into the game on March 30th of last season, the Nashville Predators were riding a seven game unbeaten streak against the LA Kings – a stretch going back to the beginning of the 2008-09 season.

Then, along came Jonathan Bernier.

With Erik Ersberg suffering from a strained back, he was recalled from Manchester, stepped right into the line-up and delivered a 2-0 shutout – the first of his career (in just his sixth NHL start).

When the Predators came to Los Angeles for the first game of their four-game season series with the Kings this year, Bernier was back in net again.

The Kings won 4-1. Unfortunately, his second shutout was ruined with less than three minutes to go in the game. Still, Bernier 2 – Predators 0 lifetime.

So, it was a natural choice when Kings coach Terry Murray decided to pull Bernier from his near-permanent seat on the bench and return him to the net against Nashville tonight.

There’s a good chance Jonathan Quick will start the next nine Kings games in a row, beginning Sunday against the Blackhawks.  Fortunately for Bernier, the Predators come to Los Angeles on Thursday, January 6.

*  Steve Sullivan added to his ridiculous career stats vs. the Kings with the Predators lone goal.

*  Anze Kopitar had found his way onto the score sheet in seven of the Kings’ last eight games with the Predators.  Despite six goals from the team, somehow he was held pointless.

*  They’re 4-1-1 at the midpoint of a 12 game stretch vs. Western Conference opponents.

*  The Kings first goal came 15 seconds into the game, their quickest this season.  Their four goal output in the first was also a first this season.
*  Trevor Lewis scored his first goal of the year, second of his career.

*  Each team had 17 wins on the season prior to the game – something had to give.

The Kings now travel to Chicago to face the Blackhawks on Sunday.  Both teams are tied with 37 points.

Kings ‘Youth and Promise’ Has Familiar Ring to Blackhawks