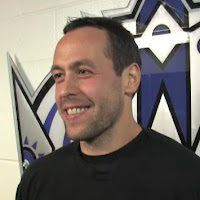 The Marco Sturm to LA trade is now complete.

And while many will write about the past relationship between Kings GM Dean Lombardi and Sturm, there is another interesting aspect to the ‘full circle’ part of this story.

It was on June 22, 1996 when Dean Lombardi – then GM of the San Jose Sharks – extended his arm to shake the hand of Sturm, whom he had just selected with the 21st overall pick in the NHL Entry Draft.

That event took place at the Kiel Center (now renamed to the Scottrade Center) in St. Louis, Missouri. Assuming Lombardi is traveling with the team, it’s safe to assume he’ll be waiting in St. Louis again tomorrow to complete the circle – hand extended, with a smile, happy to once again be welcoming Sturm into the fold.

We’ll have more on the 6’0′ left wing later today in a separate article, using our popular ’10 Tidbits’ format.