You are here: Home / comments / Ryan Smyth Readies for the Florida Panthers 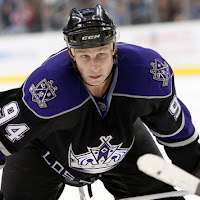 Ryan Smyth is the eldest of the veterans on this year’s LA Kings team. So, he’s been there, done that when it comes to most things in the National Hockey League – including losing streaks.

In the article below he talks leadership, preparing for the Florida Panthers and provides some thoughts on a former teammate.

MM: With the losses piling up do you start to look differently at the teams coming in this week (Florida and Detroit) or you more introspective at this point?

RS: We’re trying to focus on ourselves. The coaches do a good job of setting out a game plan for us personally and for the opponent. First and foremost we have to collectively come together and play a full 60 minutes. And just execute – execute the game plan. We’re not too far off. It’s just a matter of believing in ourselves and believing we can win again.

Marty Reasoner is now with the Panthers, you played with him in Edmonton. Any thoughts about playing against your old teammate?

He’s a competitor. He battles hard. He’s really good up the middle. I think he’s great on face-offs. He’s well respected around the league and I think as a guy that battles hard, he rubs off on his teammates too.

A hot topic in the sports world the last few days was the quarterback for the Arizona Cardinals laughing on the sidelines while his team was getting blown-out on the field Monday night. Have you had to deal with guys joking around at maybe the wrong time at some point in your career, like during a losing streak or a bad blowout?

Obviously you have to take your job seriously. We’re professional athletes. You have to deal with it properly. People deal with it in different ways. That’s the way they dealt with it. It’s just a matter of, in my opinion, you should handle it like a professional.

As we talked about it for a few more minutes, he went on to say “There’s a time and a place for everything. But, it all reflects back on the team.“