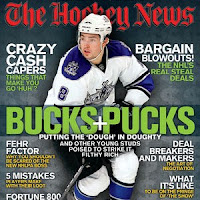 After a red hot start to the 2009-10 season Anze Kopitar was the toast of the league. People everywhere were taking notice that the 2005 first round draft pick was having a breakout year.

Then, it happened. The Hockey News slapped him on the cover and poof, that was it. Instant slump.

Now, before you discount this theory, continue reading. The proof is here. Let it marinate for a minute or two.

Sure, Kopitar eventually broke out of his post-cover slump (just five points in 12 games). In fact, about six hours after I wrote the original curse article he went on to post two points against San Jose – his first multi-point night in 23 games. That’s a quarter of the season!

The flood gates were open though. In the remaining 18 games leading up to the Olympic break he scored 21 points. Fine, case closed. Or so we thought…

With the Kings struggling mightily right now, excuses and reasons are coming from all angles. There’s the injuries to Willie Mitchell and Alexei Ponikarovsky.  You also have the missing LW issue, partially due to the absence of Scott Parse.  Then, just yesterday, Kings Goaltending Coach Bill Ranford tossed something new out there when being interviewed on NHL Live radio – the schedule.  Seems there may have been too many weeks recently where only two games were to be played.  Players don’t like time off, especially if they’re on a roll.  Makes sense to a degree.

Which brings me to something that’s been bothering me ever since October 20th.  Drew Doughty left the game that night with an upper-body injury (concussion)…the very same week he was featured on the cover of The Hockey News.

Curse or just another coincidence? How about the magazine’s issue immediately following Doughty’s cover – Mike Modano got the nod that time. And guess what? He wont be at Staples Center this weekend when the Red Wings face the Kings. He’s out for several months – maybe done for his career – after having his wrist cut by a skate last Friday. Curious timing to say the least.

Finding problems after gracing mailboxes and newsstands seems to be par for the course. At the end of last season Tampa Bay’s Steve Downie left a game due to a knee injury suffered during the same week he was on the cover of THN.

The very next issue featured Henrik Sedin. He followed-up his regular-season MVP (Hart Trophy) campaign with a modest three goals in 12 playoff games – and has netted only two goals this season…in 22 games. Ouch.

Things didn’t get any better for the next cover boy either. After showing up on the front of the late April mag, Daniel Alfredsson had just two goals in the first round of the playoffs. Oh, and his Ottawa Senators were bounced in six games by the hated Boston Bruins.

There was more over the summer. You may recall Chris Stewart and Wayne Simmonds shared the cover back in August. Stewart is out with a broken hand and Simmonds doesn’t look anything like the player he was a year ago at this time.

Enough already!  Please no more Kings on the cover of The Hockey News this season…or maybe any other season either.

Someday, when the Kings win the Stanley Cup, put the back-up goalie on the cover or something.

Is There a Hockey News Curse? – originally published January 4, 2010

Two Minutes in the Box with Wayne Simmonds