You are here: Home / NHL / Kings / Ponikarovsky – Reporting From The Sidelines 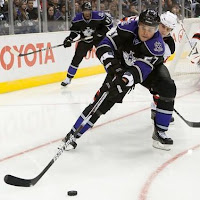 Alexei Ponikarovsky was brought in this summer to essentially replace Alexander Frolov on the third line.

He seemed to be fitting in just nicely until he broke his finger on November 6th vs. Nashville – ironically, the same night fellow newcomer, Willie Mitchell, was injured too.

In the article below, Ponikarovsky talks Florida Panthers hockey, updates us on his finger, the Kings’ overall mental health and comments on Kyle Clifford’s play…

MM: Help us preview the Panthers a bit. Their captain is Brian McCabe, your former teammate in Toronto (2003-08). What’s the scouting report?

AP:  Florida is a good team, hard working team. The guys (the Kings) are going to have to outwork them. They have pretty good goaltending. Brian is playing a big role for them on defense and their power play as well.

You’ll probably be sitting this one out, but when you’re in the line-up and you go up against a former teammate, does it motivate you all?

No. Basically, you treat it as work. There are no friends out there when you’re playing. After the game you can chit chat and shoot some jokes around. But, during the game it’s basically he’s doing your job and you have to do yours.

You’ve been on the sidelines for a few weeks.  From your vantage point, have you noticed any finger pointing going on as the team has gone through this rough patch?

No, I don’t think so. We have a pretty tight group here and guys know what has to be done. I think every team goes through a stretch like this during the season. We just have to get it out of our system right now. When you’re on a losing streak you can turn it around by winning one game. Then, you can go on a winning streak. So, it’s just a matter of putting the effort forward and we’ll go from there.

How’s the injury coming along, are you ready to get back in there?

Yeah, almost. I’ve started skating and preparing myself. But, it’s not like I wasn’t doing anything. I was working off-ice all the time, getting ready to get back. A couple of days ago I took the cast off. Like any injury, it’s going to be noticeable. You just have to play through it and take one day at a time. Well have to see when the time is right to go back in and you have to be ready.

So, there’s no timetable yet?

No. Hopefully as soon as I can. We’re just trying to take a little more precaution and not overdo it right away because I can be hard on it. Then you can lose more games if you re-injure it or something like that. So, we’ll just see how it goes.

The lines have been moved around a bit while you’ve been out. Any thoughts on perhaps rejoining a third line that wasn’t the same as when you left it?

The coaching staff know what they’re doing. They’ve juggled the lines around to get some chemistry going – to get our game going, in terms of scoring and for the guys to feel better about themselves. That’s what’s going on. As soon as I get back, we’ll see where I fit the best. Wherever they decide to put me I’ll just go there and do my job.

Kyle Clifford has been playing left wing on the third line of late. Any comments on what you’ve seen from him?

He’s a young guy, he’s learning how to play in this league. He has a lot of motivation within himself because he feels like he has something to prove – like everybody else in this room I guess. I remember when I was a young guy and I wanted to show as much as (possible) what I could do on the ice. That’s what’s going to motivate him. And it’s always exciting to play with a player who’s younger and has that spark.

10 Tidbits on Alexei Ponikarovsky – the story of Poni Boy