You are here: Home / NHL / Avalanche / Painting by Numbers with Ryan Smyth 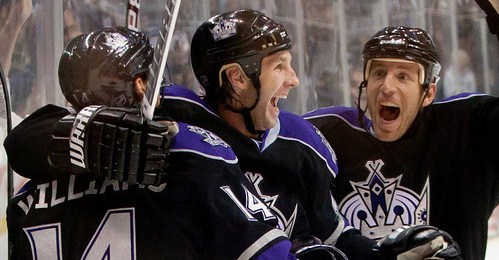 Over his four-plus-year reign as Kings General Manager there can be little arguing Dean Lombardi’s incredible success at the NHL Draft table. However, the possible knocks on his rebuilding project in L.A. have been with free agent signings and trades for veteran players.

Some fans would have preferred a quick fix solution to the team he inherited in the spring of 2006 and have spent several summers hoping he would land a big name free agent forward. In 2007 many were hoping for Scott Gomez. They ended up with names like Kyle Calder and Ladislav Nagy instead. The following summer Marian Hossa signed with the Red Wings, not the Kings.

So, it was somewhat understandable when a portion of the team’s supporters were underwhelmed when Lombardi’s big move in July 2009 was acquiring Ryan Smyth.

Besides the track record mentioned above, Smyth was 33 years old and had a history of injuries. Some even wondered if he was on the down side of his career. After all, he had a lot of miles on him (over 900 games) and too many injuries to count from years of getting beat up around the net.

However, by now it’s well documented, this has turned out to be one of Lombardi’s best non-draft moves. Smyth was essentially reborn in Los Angeles – starting last season as part of the hottest trio in the NHL, along side Anze Kopitar and Justin Williams.

Just as important as his play on the ice though, he proved invaluable in the maturation and development of the Kings young core. Players like Dustin Brown, Drew Doughty and Wayne Simmonds have all noted how Smyth helped them individually and the team as a whole.

It’s probably more than just a coincidence that the Kings made the playoffs for the first time in eight years after adding Smyth to their stable.

He got off to a hot start again this year too, playing on the Kings second line with Williams and Jarret Stoll. After being put together as a unit for the third game of the season they amassed 52 points over the next 20 20 games (22 goals, 30 assists).

During that stretch Smyth celebrated 1,000 games in the NHL.

Recently, I sat down with him to collect some memories from along the way…

Game One – January 22, 1995 – Edmonton at Los Angeles (Oilers 4-3 win)
“I remember that game vividly. Ron Lowe was the coach and I was sitting on the bench. The face-off was going to be just outside our blue line. He said ‘Alright Smitty, go out.’ Wayne Gretzky was right across, at center. I was like ‘Holy jeez.’ I was standing there looking at him. He got kicked out (of the face-off), so he was standing right next to me. That was my first NHL shift. Obviously, him being my childhood hero and both of us being there with Edmonton, it was just a thrill. I honestly can’t remember much after that, other than playing a few shifts.”

Game 500 – October 22, 2002 – Edmonton at Colorado (3-3 tie)
That had to be a big one, right – number 500? “Geez, you’re dating me now. Joe Sakic, Peter Forsberg, Patrick Roy, those guys had a great team then obviously. Battling hard against Footy (Adam Foote) on a nightly basis was really tough. It’s interesting how things evolved. I played with the Islanders, the Avalanche and now the Kings. And look how significant those teams are, I played against them for my 300th and 500th games.”

Game 700 – March 11, 2006 – Edmonton at Columbus (4-3 OT loss)
“They had come into the league a few years before that. But, with an expansion team you want to play them hard and not give them any chances. We always made sure when we went into Columbus it was a tough battle.”

Game 800 – November 1, 2007 – Pittsburgh at Colorado (3-2 win)
It’s worth noting this was the first milestone game being played at home. “True. And with with Crosby in town, you want to rise to the occasion against players like him. He’s a pivotal player in this game. So, you want to be the best player on the ice. I don’t know if I was that night, but I really tried (he laughs).”

Smyth had an assist that night. Meanwhile, Crosby had two goals and was the third star of the game. But hey, the Avs won and that was probably more important.

Game 900 – February 15, 2009 – Colorado at Detroit (6-5 S/O win)
“That’s always a tough building to play in. I was playing with Milan Hejduk and Paul Stastny at the time. They made it fun. Obviously, Pauly is a little younger and Hejdy is about the same edge. But, it was always fun playing with those guys. Joe (Sakic) was still around too, so it was exciting.”

[note: as stated above, Smyth was traded to Los Angeles in the summer of 2009]

Game 1000 – November 6, 2010 – Nashville at Los Angeles (4-1 win)
Prior to the game I asked – How do you keep the emotions in check and try to stay focused on the game? “We have a task at hand. We need to win the game and get the two points. It’s a fun moment for me, my family and my friends. But, I want to play hard and win. I want to enjoy it too. I want to seize every moment of it. That was one of my three things – wanting to play in the NHL as a young kid, winning a Stanley Cup and then 1,000 games. Only 250-something guys have done it – I thought it would be more – but, it’s a pretty special thing to be part of.”

Playing in the NHL. Check.

Now, can the Kings help Smyth achieve his personal hat-trick this season with a Stanley Cup?

And that would be really special for Captain Canada.