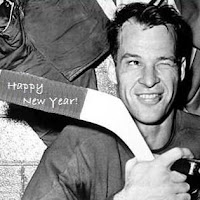 Besides size and strength, one of the many things Kevin Westgarth brings to the Kings this season is a great sense of humor. Perhaps it’s the Princeton education that helps him come up with such great quotes. Or perhaps it’s because he has plenty of time to sit on the bench and think of his witty comebacks.

Regardless, he’s one of my go to guys this season and he never fails to deliver.

With his tongue firmly planted in his cheek, he offered the following resolutions for some of his teammates…but only after first sharing one of his own…

Kevin Westgarth – Let’s start with me. My New Year’s Resolution is to beat Kyle Clifford to the first Gordie Howe hat trick for the LA Kings this season. [note: that’s a goal, assist and fight in the same game]. That’s a pretty major one.

Michal Handzus – I think I heard his New Year’s Resolution is to talk less. He’s just a chatter box in the dressing room. So, that’s something to look forward to.

Ryan Smyth – I think he’s looking to take some more one-timers with that awesome stick of his. He’s definitely looking to score some goals this upcoming year from maybe a little higher out than three feet in front of the net – although we love all those ones too.

Westgarth became distracted at this point, as Willie Mitchell and Alexei Ponikarovsky walked in after completing their post-practice work. He asked Mitchell if he had any New Year’s Resolutions and Ponikarovsky instantly chimed in before he could answer, saying “To stay healthy!” A comment that made Westgarth laugh as he said “That’s a good one.”

Back to the fun…

Jack Johnson – He probably needs to carry the puck up the ice by himself a little more, more often. He shouldn’t look to pass so much, unless it’s a backhand sauce. Then he should probably keep it to a minimum.

Jarret Stoll – Stollie just needs to continue to look good…and maybe win some more face-offs. He only wins about 60% of them and is top three in the league. I’m sure he’s looking to get to number one by himself.

Dustin Brown – Brownie needs to shoot off the wing a lot more, maybe put ’em on the far pad so Marco can get in and get some goals here with the Kings and Kopi can get some second assists for once. He’s always creating too much out there.

Happy New Year everybody. Have fun and be safe.