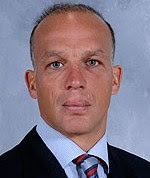 While Kelly Buchberger may not be the household name of Sidney Crosby or Alexander Ovechkin, hockey fans everywhere know the value of a player like him.

For those that may think calling him a poor man’s Mark Messier is a putdown – it’s not! – instead, think of him as Mess-light…a compliment of the highest standard. As a player, Buchberger was a winner and a leader. He knew what it took to win and did anything his team asked of him.

Although he spent much of his career with the Oilers (including a run as team captain), acquiring him from the Atlanta Thrashers in the spring of 2000 may have been one of the most important moves made by the Kings during their first 10 years at Staples Center (as written about here).

These days he’s back with the Oilers, now serving as their assistant coach.

He was kind enough to join us for a preview of tonight’s contest.

MM:  Let’s start with a just quick recap of how the season is going for the Oilers so far…

KB:  We had a little bit of a slow start. A lot of our younger players have really caught on here a lot quicker than we thought. Probably in the last 15 games we’ve played our best hockey. Our leaders are leading and our young players are playing hard and scoring.

MM:  Breaking the game down into offense, defense and goaltending, how do you see the match-up tonight between the Oilers and Kings? Let’s start with offense and the Kings forwards…

KB:  There’s no questioning how much the Kings have improved their team over the last two to three years. When you have leadership the likes of Justin Williams and Ryan Smyth up front and the way they work, how intelligent they are about the game, the younger players really caught on quick. You can also look at Kopitar and how he’s really developed into a leader and a great player.

MM:  And on defense…

Their ‘D’, they move the puck well. Obviously, with Drew Doughty and Jack Johnson they log a lot of minutes. We have to be hard on them all the time. They’re always very active, so we have to be aware of them.  They have had solid goaltending throughout the year too. With our team, there’s no question we have solid goaltending.  Our youth has obviously got us a lot of wins because we seem to play hard for 60 minutes and very seldom do we take a night off.

MM:  There was a lot of hype surrounding the Oilers’ first round pick this past June, Taylor Hall.  Given how much information is reported on young players these days, people may feel like they already know everything about him.  Yet, has there been any part of his game that’s surprised you over the first half of the season?

MM:  Many Kings fans remember you fondly from your time here with the team. Any favorite memories from playing in LA?

KB:  I’d have to think it was the guys we had on the team. We had a great bunch of guys – from Rob Blake to Glen Murray to Luc Robitaille and Nelson Emerson. We had great people and it just made it so much fun coming to the rink. My family loved LA. We loved living in Manhattan Beach and just the culture around here. We loved the atmosphere. On the ice, we went to the second round (2001), but never got the job done. But still, very fond memories of being here in Los Angeles.

Buchberger was acquired by the Kings during a stretch when they hadn’t made the playoffs in seven years. Subsequently, they participated in post season play three years straight. Coincidence? I think not.

It’s probably also part of the reason the young Oilers are one of the fastest rising teams in the NHL. You just can’t replace that type of attitude and experience.

What Shoulda Been – Kings vs Oilers, November 2009

Painting by Numbers with Ryan Smyth – reliving key milestones, in his words

Best Acquisition of the Decade – notes on Deadmarsh, Buchberger and others
.