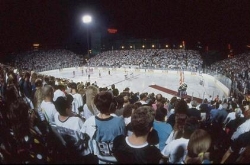 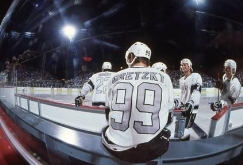 Could the Kings be headed to next year’s Winter Classic?
More on that in a minute, first up a DVR alert.
Early Saturday morning (5am PST) the NHL Network will air an encore presentation of what many consider to be the first outdoor game played by two NHL teams.

Played on September 27, 1991 in Las Vegas, this game didn’t feature the picturesque snow filled background that has become part of the recent New Year’s Day tradition.

No, this game was played in summer heat. LAKings.com describes the game as:

The Las Vegas strip provided the background for the first ever NHL exhibition game to be held outdoors. The Kings and the Rangers battled under the lights outside Caesars Palace – the first hockey game played in Las Vegas since 1968 – in mid-80 degree temperatures. The game drew a crowd of 13,000, most of whom wore shorts and t-shirts to take it all in. “We were a little bit in awe and I’m sure (the Rangers) were too,” said Wayne Gretzky, who tallied a goal, about the outdoor game. “We kept looking at each other and couldn’t believe we were playing hockey in 80-degree weather. But it was real nice.”

So, after you put the cookies and milk out for Santa tonight, make sure you set up the DVR to record this game.  To get you warmed up, here is some video from the first fight of the night – Rod Buskas (Kings) vs. Kris King (Rangers):

Now on to next year…

We normally don’t report too many rumors here on MayorsManor.com – however, this one is too good to pass up.

This week’s hot rumor out of the NHL offices in New York City is that the league is very interested in putting next year’s Winter Classic in none other than the Big Apple.  Contrary to other reports, the new Yankee Stadium is not the destination (it’s unavailable for the next few years due to a college football bowl game).  Instead, they’re looking at Citi Field (home of the New York Mets) and the new Jets/Giants football stadium.

If it all works out, which teams are in the running?  Well, it’s possible it could be the New York Rangers vs. the Los Angeles Kings.  This is all rumor, unsubstantiated.  But, still.

How awesome would it be to see the NHL pit the two teams from the largest U.S. markets against each other?  You get the dynamic that most sports leagues (and TV executives) love – east coast vs. west coast, LA vs. NY.

Prince may have to record a new song.  Something about it being 1991 all over again.

Stay tuned.  No official announcement is expected for several months.

Plenty of time for more speculation.