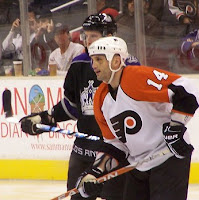 The best players in the National Hockey League usually have nicknames that everybody knows.

And Lappy is no different.

Around the league Ian Laperriere is universally loved and admired. He was called the toughest guys in hockey by The Hockey News last year and he’s been a fan favorite everywhere he’s played. Unfortunately, he’s on the shelf right now – without any timetable for a return.

Last month he made his inaugural visit to MayorsManor as a guest on our podcast (available here). It was an extremely candid conversation that saw him open up about leaving LA, his dislike for certain teammates and his relationship with the fans.

Today, he’s back to help us preview the Flyers visit to Staples Center tonight for a match-up with his old club, the Kings…

MM: What have you seen from the Kings so far this year?

IL: They have a lot of young players still, but with a lot more experience. I think that’s the key with the Kings right now and that’s why they’re successful this year. They’re playing well because they’re a little bit older, a little bit more mature. The way Brownie and Kopitar are playing it’s not a ‘bright future’ anymore – it’s ‘they’re there.’ I think they’re one of the top teams in the league – for sure in the West, but I think in the league too. They have as much of a chance as the other top teams to win the Cup this year.

Over the last few years goaltending has been one of the hot topics surrounding the Flyers. Do you think things are settled in net for now?

Sergei Bobrovsky came out of nowhere. He impressed everybody in camp. Now, he’s our number one. (Brian) Boucher is playing well too. There’s two ways to build your team right now. You can build your team with a great goalie and pretty good defenseman or great defenseman with an OK goalie. I think it caught us by surprise how good Bobrovsky was. But, the way they’ve built our team with Pronger and Timonen on defense, I think we have a great D-core. It helps to have a great goalie, but I think our D-core is really strong. Whoever is in net they have an easier job than they would on other teams I guess.

[note: It appears from morning reports that Michael Leighton will get the staring nod for the Flyers tonight. If so, it would be his first start since last year’s Stanley Cup Finals.]

Speaking of the D, Chris Pronger will still be out for a few more weeks with a foot injury. What does it mean to the Flyers to not have him in the line-up?

It hurts. He plays 30-plus minutes a game and he’s an experienced guy. He makes your team that much better. It’s not by luck that everywhere he goes the teams he plays for are unbelievable and are better or have a good run. He makes everybody better. So, for sure we’re going to miss him. But, we do have a lot of depth and we have young guys that will play a lot more with Pronger out. I really do think that long term it’s going to be good for the team that Chris is taking some time off because of an injury. He played a lot of hockey in the last year with the Olympics and the Finals. He’s not getting any younger. So, I really think it’s going to pay off big for our team at the end of the year.

Kimmo Timonen may not play against the Kings. At first they were saying no and now it looks closer to a yes. Either way, the team called up Erik Gustafsson for some insurance. You’ve spent a little time this season with the Flyers minor league affiliates and other prospects. What do you know about Gustafsson?

I saw him in camp and he had a real good showing. When I went to go visit him he was struggling a little bit. But, he’s been playing much better lately. That’s why they called him up. They see him being similar to Timonen. He’s a smaller defenseman (listed at 5’10”), but strong on the puck. I don’t think he’s Kimmo, but he’s got the same frame. If he can be half of what Kimmo Timonen is, he’s going to be a hell of a player. Timonen is one of those defenseman that you get to appreciate a lot more when you play with him. When you play against him you know he’s good. But, when you have a chance to be on the ice with him it’s amazing how good he makes everybody else out there.

[note:  Gustafsson will be making his NHL debut if he gets into the Flyers line-up.  He was leading the AHL’s Adirondack Phantoms in points (26) and assists (22) through 33 games.]

Another line-up change for the Flyers involves Jody Shelley, who received a two game suspension for a hit on Andrew Alberts in Vancouver Tuesday night. How much does that hurt the physical play of the Flyers?

It does hurt. Jody brings some leadership and he keeps everybody on the other team honest. Personally, I didn’t think he was going to get suspended. Last week (Milan) Lucic did the same thing and he got a fine.

Have you talked to Sean O’Donnell – does he have any mixed feelings about coming back to LA for what may end up being his final game at Staples Center?

I haven’t talked to him in a few days. I’m sure he’s excited like we all are when we go back to teams we’ve played for. I cant speak for him, but it’s going to be special for him. He played most of his career in California and I’m sure he’s looking forward to it.

Your fans in LA will probably be looking for an update on your injury situation. Any changes since we spoke a few months ago?

No, it’s the same. I feel fine working out and going through my regular activities every day. But, it’s when I get on the ice I still have issues with the lights. I really do think it’s the nerve damage in my eye that causes me problems. To say that I’m close to coming back would be lying. Right now I’m in that mode where I’m thinking a lot about what I’m going to do. I’m not too down, but it’s not fun right now. I don’t think I’ll be able to come back the player I was before and if I’m not, I won’t be back.

Flyers at the Kings, final score – what do you think?

Who gets the game winner?

Some games are just easy to get up for. Players and fans alike have had this one circled for a long time. Flyers vs. Kings – a possible Stanley Cup preview. That sure would be fun.

Tonight, however, just wont be the same without seeing Lappy back on the ice at Staples Center.

Westgarth and The Week Ahead – his comments on Kings vs. Flyers