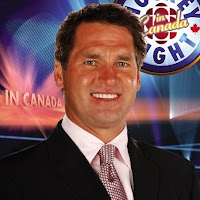 Former Kings goaltender (and current Hockey Night in Canada analyst) Kelly Hrudey was on NHL Live radio yesterday. He talked quite a bit about Jonathan Quick, so I thought I’d pass on some of the quotes…

Billy Jaffe asked “If you could pick one goalie to start a team with right now, who would it be?”

Hrudey responded with “For many reasons I can chose about five or ten guys. So, this may surprise you a little bit – but because of age, because of the way he’s playing right now, I’d guess I’d go with Carey Price…but, I may go with Jonathan Quick.”

He went on to say that Quick “really impressed” him last year and he’s “20 percent better” this season, adding “there’s just something about his mental make-up that makes him feel like he’s a general back there. Like nothing is going to affect him. He is, in my opinion, in the top five right now.”

Hrudey said even though Quick isn’t “getting a lot of credit” right now and is “flying under the radar,” that “because of his competitive nature” he likes him a lot.

High praise from a guy that knows a thing or two about the position.

For more comments from Hrudey about many of the top goaltenders in the Western Conference – including more on Quick/Bernier, plus Roberto Luongo, Marty Turco, Antti Niemi, Jimmy Howard, Craig Anderson, Jaroslav Halak, etc. – be sure to check out his visit to MayorsManor from earlier this season.  We covered it all in an interview linked here.