You are here: Home / NHL / Kings / Holiday Series – Gifts of Christmas Yet To Come

Thursday’s Kings Gifts of Christmas Past included items such as a game worn Rogie Vachon mask, a Gretzky doll and the must have book for all Kings fans.

Yesterday’s Kings Gifts of Christmas Present featured Bailey, his/her items, magazines and some of the hottest shirts around!

For the final chapter in the series, we proudly present the Gifts of Christmas Yet To Come…a special sneak peek at five items that may be available in the not-too-distant future… 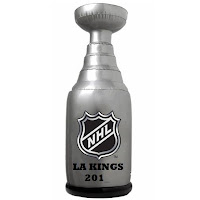 These inflatable Stanley Cups stand over three feet tall and will run you about $35 plus shipping.  They’re great for pool parties, creating a parade down your street on weekends, carrying around Staples Center and much more.

The factory in China is all set and ready to print ’em up and ship ’em out.  They’re just waiting for the final digit to complete the year. 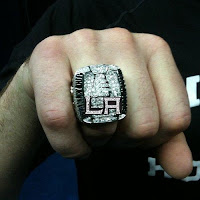 After Drew Doughty, Dustin Brown and Anze Kopitar get their new bling, there’s bound to be a few of you out there who will want a matching ring for yourselves.

While you won’t be able to get the real thing, don’t worry – just like that Kings jersey you wear to most home games, you’ll be able to pick up a replica version at the team store.

This bad dude will run you about $250 and before you ask, yes – yours will have cubic zirconias.  But, many they’ll look good! 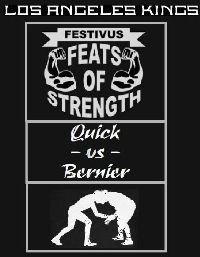 In the true spirit of Festivus, next winter the Kings will be hosting a special one-night-only event at their training facility in El Segundo, CA – the Festivus Feats of Strength contest, featuring the battle of the Jonathans, Quick vs. Bernier.

They’ll face off in must see competitions like wrestling, weight lifting, barrel toss, Zamboni pulling, stick breaking and helmet crushes.
Nobody goes home until it’s decided once and for all, who is the baddest man on the planet wearing a Kings goalie mask.

Be sure to get your tickets early for this one, as it will sell out.  General admission tickets are $32, VIP seats are $45 and come with a signed poster. 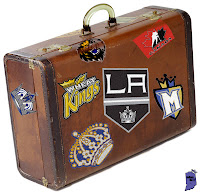 For all you heavy travelers out there you won’t want to miss out on this item.

Set to come out later this spring, it’s the Brayden Schenn Luggage Collection.  These sporty pieces come adorned will emblems from all his recent stops.  They’re designed for fashionable folks, with a bit of functionality too – each piece fits inside airplane overhead compartments and can help speed you through customs when shuttling back and forth between Canada and the United States. 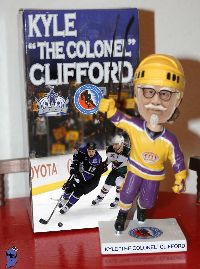 If you’ve read the previous two gift guides this week, you know we save the best for the last…

This item will sell for $13 and will be limited to a signed and numbered edition of only 1,000.

Be sure to order one before all the other hockey fans out there realize just how kick ass this kid is!

There you have it, this completes the Gifts of Christmas Past, Present and Yet to Come.

One final note, I’d like to say a HUGE thank you to Indiana Matt for providing the images on the last two items.  Couldn’t have done it without him.  If you like his work, follow him on twitter.

Merry Christmas everybody…and to all, a good night.

PART ONE:   Gifts of Christmas Past