You are here: Home / NHL / Kings / Holiday Series – Gifts of Christmas Past

[Part one of a three part series]

In Charles Dickens’ classic novel A Christmas Carol the reader is taken through a spiritual awakening of Ebenezer Scrooge, a process that includes visits from the Ghosts of Christmases Past, Present, and Yet to Come.

That tale began on Christmas Eve, however we’re going to begin a day earlier and with a slightly different twist.

For the enjoyment of you and the other hockey fans in your life this holiday season, we present an essential collection of Kings Gifts of Christmas Past… 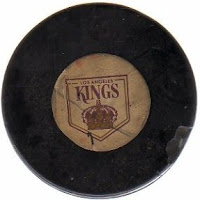 When dealing with the Kings past you can only go as far back as 1967, the year they came into the league.

To get started with old purple and gold era memorabilia, you may want to pick up a puck.  They’re usually fairly inexpensive and are great conversation pieces.  The one to the left is currently up on ebay starting at $9.99. 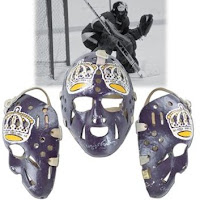 Now, if a puck is just too small potatoes for some of you big spenders, we’re going to jump straight up to the big time.  The mask to the left was worn by Kings’ goalie Rogie Vachon around 1976-78.  For a mere $33,000 you could have won it in an auction last month.

If that’s a little out of your budget but you still like the mask, pick up a replica for about $500 at several online retailers, including here. 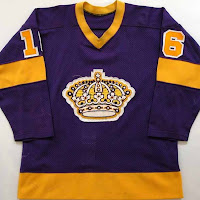 For more game-used equipment, you can hunt down something like this.  Pictured to the left is an actual game worn jersey from Marcel Dionne, which recently sold at auction for about $4600.

A Dave Taylor or Charlie Simmer will run you about half that price.

To save even more money you can order up the new Reebok vintage version here for a couple hundred bucks.  Looks just like the ones the Kings wore on opening night this season and will wear again on January 15th. 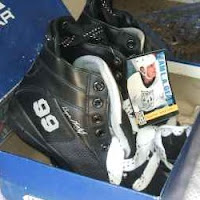 Once you get into the black and silver era – or the Gretzky era as some call it – you’ll have many more gift ideas to select from.

One of the ultra rare items are these Gretzky shoes – complete with hockey skate laces.

If memory serves correctly, these were made by L.A. Gear.  Good luck finding a pair though, especially ones in good condition.  You may have better luck finding a game-used pair of Gretzky’s skates. 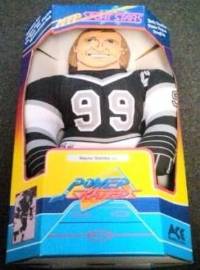 Perhaps equally as rare – and far more cool – is this Gretzky doll.  Long before Pillow Pets were all the rage, you could snuggle up with a #99 doll while watching Kings games on TV.

These came out around 1991 after a successful line of similar dolls for wrestlers Hulk Hogan and Rowdy Roddy Piper.

If you have one already, hope it’s in good condition.  These are super, super rare.

Among this collection I’ve saved the best for last. It may not be the most difficult to find or cost the most – both of which are actually part of what makes it so great – yet, if you’re a Kings fan, you have to own this book.

Kings broadcaster Bob Miller is an institution. He’s a constant, crossing over the purple and gold era, through the silver and black days, all the way up to the present.

This book features some of Bob’s favorite memories over 30+ years and is like taking a walk down Kings history.  When it comes to the Kings past, this is perhaps the bible.

Click the image to the left and pick up a copy at Amazon.  You can even get a used copy for a couple of bucks.

Tomorrow the series continues with a look at important Kings Gifts of Christmas Present.

PART THREE:   Gifts of Christmas Yet To Come