You are here: Home / comments / He’s Back… Five Questions with Willie Mitchell 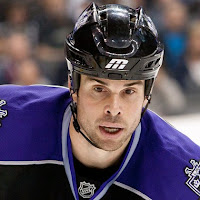 As Willie Mitchell prepares for his return to the Kings line-up tonight, we caught up with him for an exclusive interview.

Among the topics he talks about is trying to find a positive in being out injured, tonight’s milestone game and he weighs in on young defenseman, Alec Martinez.

MM: Any observations while watching the team from the sidelines over the last few weeks?

WM: Our game is starting to come around. We’re starting to shoot the puck a little more. It’s good. This game has peaks and valleys over the course of a season. Every team has them and we had a little bit of a valley there obviously. It’s a younger team, so sometimes the trough becomes a little bit bigger because sometimes when you’re a little younger you get a little emotional.  When things are going really well you get a little too cocky and when things aren’t going as planned you start to shrug the shoulders and your stick gets a little heavier. It’s up to (the veterans) in this room to help with that. Guys seem to be playing a little better right now though and we’re trying to get back to what we were doing at the start of the year.

MM: You were acquired in late August, camp was a few weeks later, then then season started – it all happened so quickly.  So, was being out of the line-up a positive at all, in the sense that you could sit back and observe the team a little…

WM: I wish I could take that positive outlook. To be honest, I was just starting to feel my groove. I was just starting to feel good out there, playing my game. By no means, I didn’t think I had a bad start. Yet, I have high expectations for myself as a player to help out the team. I felt like the last five or six games out of my first 13 I was starting to get into my groove and I was happy about that. Now, I’m going to have to find that again. Hopefully it’s going to come back a little quicker this time. I guess the positive to it was as much as it was a bad thing for the team, I had a partner who was out with me (Alexei Ponikarovsky). Our workouts were very hard. We did a really good job with them and enjoyed each other every day. There’s days when you come in and you’re tired because it gets boring working out every day. One would pick up the other and because of that you saw how well he played when he returned the other night. We wanted to come back and not miss a beat. We wanted our conditioning to be there. That’s the positive, as much as being out was a negative for the team.

MM: Earlier in the year you gave us your feedback on Jake Muzzin when he was here. How about Alec Martinez – what impressions do you have after his first seven games with the team?

WM: He’s a good puck mover. Something we’ve needed to kinda balance out the back-end is a guy who can shoot the puck. I’m the biggest believer in that and it’s a lesson I learned in the last couple of years. I never had it earlier on in my career because I was with Jacques Lemaire (in Minnesota) and everything was defense, defense, defense and I kinda forgot about the offensive part of the game. I forgot to, not take chances, but push the puck. What he does really well is he shoots the puck. You don’t even have to hit the net. If you just get it down by the net, stuff happens on it. That’s what he’s done a great job at, shooting the puck and getting the puck down to the net.

MM: Your return will be your 600th NHL game. Does that mean anything special to you?

WM: Sure it does. I’ve had a couple of injuries and 2010 is the year I want to get past. I haven’t played a lot of games in 2010. I should be at 700 right now. Absolutely! Anybody is proud to hit milestone games. We all, most of us – some guys maybe fast tracked, always dreamed of playing in the NHL. The first game was an honor. So, to play 600 in the league and play over 10 years, I’m very happy about that accomplishment and feel very lucky.

MM: Not sure if you’ve noticed, but the Kings defensive core is anomaly in that all of the dmen are former college hockey players except Drew Doughty…

WM: I didn’t know that. Smart defensive core, huh? Well, you have to be smart as a defenseman. Forwards just skate up and down and don’t think. Defenseman, you actually have to read the game. We’ll run with that a little bit.

And just to note, yes – he was joking. He laughed quite a bit about that last answer and was actually trying to bait Dustin Brown who was standing near by. Unfortunately, the captain didn’t bite.