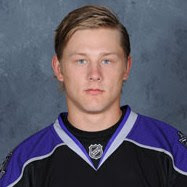 When is the right time to cut bait with a prospect?

Kings GM Dean Lombardi has openly said he probably waited a year too long with Brian Boyle, in terms of getting maximum trade value.

It’s just so tough though. When a kid hasn’t even played a full season – or probably two – in the NHL, how do you really know if he’ll ever be ready?

Oscar Moller is probably at that fork in the road with the Kings.

The 21 year old forward was drafted by Los Angeles in the second round of the 2007 NHL Entry Draft. Since then, he’s played 74 games with the team through multiple call-ups over the past two seasons.

He’s also been spending time in Manchester, where he was when recalled yesterday. He has 18 points in 19 games there this season (6g, 11a).

Besides his size (listed at 5’10”, yet he sure seems smaller), the biggest hurdle to a full-time job with the Kings may have been injuries.

In fact, Coach Terry Murray talked about it just a few weeks ago when discussing the possibility of Brayden Schenn playing in the World Junior Championships this year.  Moller was injured while captaining Team Sweden at the tournament a few years ago. Specifically, Murray said “It (the injury, a clavicle fracture) set him back the rest of that year and maybe had an impact on how things went the following year.”

Regardless, if the team was that high on him, you would think he’d have already been with the big club. If he had the ability to score at the NHL level, he’d be with the Kings. They need scoring.

So, perhaps this is it. The final audition…aka a prelude to a trade.