You are here: Home / AHL / Brayden Schenn on The Road to Nowhere 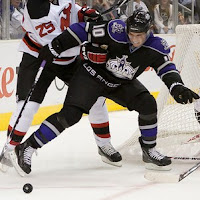 For the past few months Kings prospect Brayden Schenn must feel like he’s living the life of a Talking Heads song from the mid-80s.

He’s been to Team Canada’s summer camp, the Kings training camp, played a handful of games in the NHL, two weeks in the AHL…all while waiting to find out if he’s going back to the WHL at some point.

Indeed, a road to nowhere at the moment.

After the Kings morning skate today at their training facility in El Segundo, CA, Schenn provided the following comments exclusively to MayorsManor…

MM: How good does it feel to be back in LA right now?

BS: It feels great. I’m still not sure, certainly, what’s going to happen. There are a few options still left. But, for now I’m here. Just take it day by day. That’s all I can really do.

MM: There was a report out of Canada yesterday that said the Kings are reluctant to send you back to Brandon (his junior team) right now, given how they’re playing. Have you heard anything about that possible theory?

BS: I haven’t heard anything like that. I don’t know anything about that. Anything’s possible, so we’ll see what happens. This is all news to me. So, I can’t worry about it.

MM: Team Canada is supposedly holding a spot for you on their World Junior team (final evaluation camp opens in a few weeks). Any thoughts about possibly playing in the WJC again?

BS: Obviously, any time you can represent Canada, or your country, it’s a great honor. It’s nice to have Canada hold a spot for me and hopefully it all works out here. But, anything’s possible now. So, I guess it’s just a waiting game to see what happens. I’m waiting for it to play out.

[note: Schenn won a silver medal with Team Canada at last year’s World Junior Championships…he had eight points (2g, 6a) in six games…in 2008 he won gold with Canada at the U18 World Championships]

MM: Have you talked to or do you plan on talking with the coaches or your agent to express a desire to play for Team Canada or…

BS: (he cuts me off, not rudely though) Nope. It’s out of my hands. My focus is staying here, being part of this team and trying to help them win. If it comes down to World Juniors, I’d certainly be happy. But, my first goal is to stick in the National Hockey League.

MM: Switching gears a little bit, how about your trip to Manchester – tell us a little about the experience.

BS: There a lot of good prospects there and they have a good group of guys there (overall). I went down there and helped them win some hockey games, pretty good record. It was fun being down there for the two weeks. It was good to go down there and get some confidence. Now I’m back here and we’ll see what happens.

Yes, we will – at some point.  Nobody seems to be saying when right now though.

He’s played in eight NHL games this season. Thus, he’s eligible to play one more before the first year of his entry level contract kicks in (something the team probably doesn’t want to do unless he’s going to play often).

For now, it looks like he’ll be a healthy scratch again tomorrow night when the Kings take on the Florida Panthers.  At least that’s the latest word from Coach Terry Murray (link to his quotes below).

So, like Brayden, we’ll just wait to see what happens.

Terry Murray comments on Schenn – back to juniors, release him to Team Canada, etc.?