You are here: Home / hockey / Whiskey In The Morning 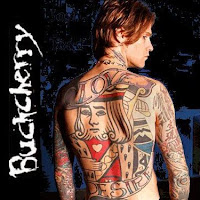 No, that’s not Davis Drewiske sportin’ some new ink.

If you’ve never heard of them, you’re probably at least heard them – provided you’ve been to Staples Center this season and returned to your seat prior to the end of the second intermission. Right before the players come out for the third period, blaring through the speakers is a newer track from the the L.A.-based rock group.

However, many years ago, they released a tune titled ‘Whiskey in the Morning.‘  Which is, of course, only appropriate considering we have some comments from Drewiske to share…

MM:  Even though the season is still young, the defensive pairings have gone through some changes at times – first with (Drew) Doughty and (Matt) Greene out and now Willie Mitchell.  Any thoughts on how it’s coming together with all the moving pieces around the blue line?

SP:  You know, I think pretty well.  So far, certainly Quicky (Jonathan Quick) has been pretty good – which has helped.  So, we’re kinda mixing and matching throughout the game.  But, for the most part, we’re doing a good job of keeping things on the perimeter.  We’re not giving up a lot of goals.  I think that has a lot to do with the way Quicky is playing.  There’s still room for improvement, but there’s some stuff to build on.

Well I think at times we’re asking a little bit too much out of Quicky.  We need to limit those chances against and we’ll be better off that way.

What’s your take on the physical play that seems to have ramped up over the last few games?

It’s just a competitive game.  Stuff happens and guys are going to react.  It’s good to see.  We’re playing hard and playing for each other.  We have kind of a pack mentality and it’s good to have.

The Kings are undefeated against the Eastern Conference this season.  Any particular reason for the success so far?

I don’t know.  It’s still pretty early I guess.  We’ve had a good start and hopefully we can continue it.

Matt Moulson was in town last night with the Islanders.  You played with him two years ago in Manchester.  Any memories?

He’s a good guy.  He’s just a hard worker and really competitive.  Around the net he’s really good with the puck too.  So, I’m really excited for him with all the success that he’s having.

Perhaps Moulson’s old Monarchs teammates were trying to put on a show for him.  Drewiske picked up an assist – his first in five games.  Scott Parse also had an assist, for the third game in a row.  Kevin Westgarth had two fights in the game – his first pair of the year.  And Quick continued to play lights out hockey, stopping 18 of the 19 shots he faced.

If it was ‘show up your old buddies’ night at Staples, that may explain the Islanders lone goal.  Scoring just past the five minute mark of the first period was Rob Schremp.  Who’s that you ask?  He just so happens to be Dustin Brown‘s linemate from bantam hockey.

In the end, Brown probably got the last laugh though.  He scored on a penalty shot in the third period to basically put the game out of reach for his old pal.

Interview with Kevin Westgarth re: the possibility of finding a fight versus the Islanders

Interview w/ Scott Norton – the agent for Brown and Schremp