You are here: Home / Interview / Westgarth – Cheerleading For The Wolfpack 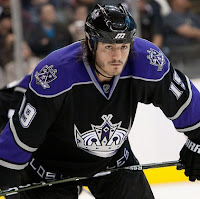 Although patience is a virtue, there’s little worse than waiting.

When it comes to Kevin Westgarth, things have gotten to the point that he just smiles and laughs when he sees me coming. Of course he already knows what we’re going to talk about.

He knows the drill. He knows the routine. So, we’re just having fun with it at this point.

MM: So, how tough was it watching the Dallas game when things starting getting physical?

It was pretty tough.  By the same token, it’s great to see that everybody in the line-up is willing to do whatever it takes to back each other up.  It’s definitely a focus of ours, to have that wolf pack mentality.  You can see it from top to bottom.  We’ve joked how Justin Williams has a fight and I don’t.  The perfect expression of this team is that anybody is willing to go and anybody is willing to back each other up.  That being said, I know which side my bread is buttered on.  My hands still get a little itchy sometimes.  I’m definitely looking and asking.  I’m kinda talking to the guys about what more I can do to mix it up and make guys want to fight me.  There is an adjustment.  I think it was a lot easier to find fights in the A (AHL) sometimes because a lot of teams had meatheads who didn’t play a whole lot and were just there to fight.  You don’t really see that as much here.  Even the guys that may be in my weight division, they often don’t feel too inclined to mix it up against me I guess.

And if you’re in the line-up versus the Islanders…

Well, I know (Trevor) Gillies is there and he wouldn’t have any qualms about dropping mitts.  He’s one of the guys I respect and I’ve actually been able to talk to over the years.  My brother ended up playing with him last year.  I know he’s a great fighter and a great competitor.  I’m hoping I’m in and can play some good hockey.  Show what I can do.

[update:  Westgarth will start on the fourth line, along side Kyle Clifford and Trevor Lewis…on the Islanders side, Gillies is expected to be a healthy scratch]

He was last year.  But, he’s retired now.  He’s all done – moving on, trying to start real life for whatever reason.  I don’t get it.  That’s all right though.  I like my afternoon naps a little too much I think.