You are here: Home / Interview / The Colonel’s new 13-Piece Bucket 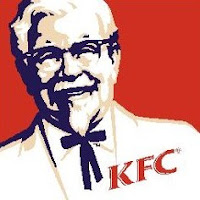 Adding a ‘Y’ or ‘IE’ to the end of a player’s name doesn’t make it a nickname. That’s just more like shorthand.

Occasionally, you get the ‘ER’ on the end. That’s still not a nickname.

And for all the Deans and Dans, no – extending the name with an ‘O’ doesn’t count either.

Then, every once in a while, a truly awesome nickname comes along.

Kings prospect-turned-10-game-pro Kyle Clifford has been on MayorsManor several times this year. He updated us from Team Canada’s World Junior camp this summer, provided game previews during rookie camp and even stopped by to give his thoughts on staying or going, as decision time drew near.

Mr. Kyle Clifford is actually Kyle Frank Clifford. As in, KFC. So, that’s right…his nickname is the The Colonel.

MM:  Kyle, thanks for holding out on us. What’s the story here?

KFC:  We thought it was going to take off a couple of years ago because my initials are KFC, like Kentucky Fried Chicken.  It kinda started in juniors a little bit with the training staff and stuff like that.  It never really went anywhere from there I guess.

What are your thoughts on it?

Maybe it might get me an endorsement deal with KFC one day.

Well, that just means a year is off my contract.  I still have to stay focused and keep my head on my shoulders here.  We have a good team here.  It was never really about playing in this league, it was about winning in the NHL.  Ten games is just a mark.

The last few games have been a little more physical than earlier in the season.  You had a nice overhand right in your fight with Brandon Segal last night.  It looked like vintage Chuck Liddell.  Are you a UFC fan at all?

A little bit.  I watch a few fights here and there to see if I can pick up a few things, a couple techniques.  But, yes, the games are going to keep getting physical.  We’re one of the top teams right now, so other teams are going to try and intimidate us.  Guys like Kevin Westgarth and myself have to take control and make sure our skilled players aren’t getting pushed around out there.

There you have it…The Colonel, Kyle Clifford!