You are here: Home / draft / Manchester Mondays with Muzzin 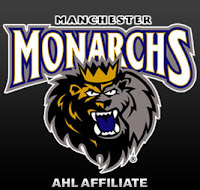 Saturday night Jake Muzzin played over 16 minutes against the Islanders, the most ice time he’s seen so far in his brief 10-game career in the NHL.

He’s expected to have some increased responsibilities on the blue line over the next few weeks while the Kings wait for Willie Mitchell to heal up. Yet, that’s didn’t stop Jake from agreeing to be our unofficial Manchester reporter.

Although he’s currently with the big club, the young defenseman has been sent down and called back a few times over the first month of the season. So, we’re leaning on his point of view for this week’s Manchester Mondays report…

JM: Exactly. He’s practicing, but he has the yellow jersey on (non contact). So, I think he should be back shortly.

[update: per a team press release late this afternoon, Teubert has been activated from IR]

From Thomas Hickey on down, nearly all of the Kings top prospects on the defensive side of things are in Manchester this season.  Any other updates from the blue line?

It’s a healthy competition right now.  They have seven ‘D’ that are playing well and when Teuby gets back there’s going to be another one.  It’s a good competition.  It’s a good problem to have for the team because when one sit out one guy he’s going to work that much harder to get better and get back into the line-up.

You were able to get in a dozen or so games last season with the Monarchs.  Has there been any particular veteran that has taken you under their wing a little, either this year or last year?

Not really.  I kinda know the ropes from last season.  The older guys helped me out then though – guys like Drew Bagnall and Skula (Joe Piskula).  I’m also friends with Andrew Campbell.  I played junior with him.  So, we’re good buddies from a while back.  Most of the guys hang out with each other.  It’s a good group of guys there, everybody gets along.

[note: Campbell and Muzzin played junior hockey together on the Sault Ste Marie Greyhounds (OHL) from 2006-08]

Who are you rooming with back there?

I’m staying with Jonesy at the hotel.  I was also hanging out with Soupy (Campbell), Jordan Nolan and Dwight King.  They have a house together.

Yeah.  I played with Nolan too.  Then, when I was in the hotel room last year I was with Dwight.  So, I know those guys a little bit more than some of the other guys.

Speaking of the Greyhounds and Nolan – he was a point a game player there last year (23g + 25a = 48 points in 49 games).  So far this year he has just one assist in 13 games with the Monarchs.  What’s the story there from what you’ve seen?

I guess he’s not getting bounces.  He had a wide open net the other night that I saw and he hit the post.  He’s getting opportunities.  He’s a skilled player.  Maybe things aren’t going well for him right now.  But, I know when he wants to turn it on he can be a really good player.  It’s just a matter if he wants to do it or not.

On the opposite end of the spectrum is rookie Brandon Kozun.  He’s right in the hunt for the team lead in goals and points (5g + 5a = 10 points in 14 games).  Any observations so far?

He was scratched for one of the games I was there.  But, the other game he was a little waterbug out there.  He was buzzin’ around, hitting and creating havoc.  He’s small, but he’s feisty.  He’s hard on pucks and he battles hard.  I think some people maybe go into a battle underestimating him because he’s smaller, but then he surprises them and comes up with the puck and makes a play.  You have to watch out for him because he’ll make you look stupid sometimes.

And in net the Monarchs have two goalies, Martin Jones and Jeff Zatkoff.  How are things looking with the goaltenders right now?

Both those guys are pushing each other.  Zatts has been around and Jonesy is coming up, he’s a young star.  So, we have a really good team down there.  We have a lot of young skilled guys and the ‘D’ are all good.  With the goalies, they have a good battle going.

Wrapping things up with you and your game…you’ve been shuttling back and forth over the last few weeks.  Is it getting difficult to remember who you’re playing for on any given night?

Not really.  You just have to understand it’s part of the development process of making the NHL when you’re in this position.  I’m just trying to make light of the situation.  Obviously, I’m happy to be back right now.  I want to be here all year.  But, when I go down I’m not moping around or pouting or anything like that.  I’m just having fun playing hockey for a living.  That’s my dream and that’s what I’m doing, so it’s a lot of fun right now.

Remember when your mom would say ‘It’s all fun and games until somebody gets hurt’?  Well, in this particular situation, that’s not exactly true.

Unfortunately, as guys like Mitchell and Drew Doughty have been injured, Muzzin’s ice time in LA has increased.

And more ice time equals more of that fun he just mentioned.

OHL GM Speaks Out on Kings Players – his comments on Muzzin, Simmonds, Campbell and others