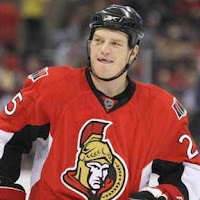 The Kings are preparing to take on a fairly unfamiliar opponent later today in the Ottawa Senators. Over five plus seasons since the lockout they’ve only met four times, with LA winning the last three.

One of the game-within-the-game stories for tonight is Chris Neil, who will be celebrating 600 games in the National Hockey League.

Earlier today I spoke with Chris about his special achievement, tough guys in the league and preparing for the Kings…

MM: Looking back, your first NHL game was against the Toronto Maple Leafs.  Any thoughts about how you’re feeling today versus how you might have been feeling that afternoon?

CN:  Playing my first game against Toronto – you don’t even remember touching the ice, you’re so wound up and excited with your adrenaline going.  After the first period you sort of settle in and you get your groove.  I think to be coming up on 600 games after not even really realizing you’re in your first NHL game it’s pretty exciting.

In an unusual twist you’ll be sharing the milestone with your linemate Jarkko Ruutu (also celebrating 600 games). Have you ever heard of a situation where linemates share a milestone like this?

No, I haven’t.  We were both close and it didn’t even really sink in until about eight games ago that realistically we could both reach the milestone in the same game.  Just being able to be part of another guy doing it at the same time is pretty exciting though.  We’ve had a bunch of milestones here with our team – we had Daniel Alfredsson last year reaching 1,000 games played and then his 1,000 point this year.  So, it’s nice to be part of one team and see other guys reach certain goals.  To finally reach a goal of my own is exciting.

LA is a team you guys don’t see very often, once a year at the most.  So, how do you prepare for a Western Conference team and is it more difficult to get up for a game like this compared to a division opponent, who you’re more familiar with?

Looking at your career stats, you’ve played almost an exactly equal number of games on the road versus home (295 home, 304 road).  Yet, you’ve scored more goals on the road (41 road, 31 home) and you have about 25% more penalty minutes at home (687 road, 847 home).  Do you feel you play the game any differently on the road compared to how you play at home?

The way I approach the game is you go out and stick up for your teammates.  I don’t go out and fight just for me like some guys do.  I go out and stick up for my teammates, play for my teammates.  That’s what it comes down to.  Sometimes on the road you don’t get out against a certain line or certain guys because they get last change.  So, definitely when you’re at home if somebody does something, your coach is able to put you out against them and you’re able to rectify stuff.

You had 13 fights last year and you’ve already had five fights this year.  However, one of your former teammates – Brian McGrattan – recently called you out as basically a pest, not a fighter.  [note:  He specifically said things like “I had to protect that guy for three years when I was there. He’d do that and I’d have to fight all his battles for him.”].  Is that how you see yourself, are you more of a pest, are you a fighter, an enforcer – how do you classify things?

When I came into the league I fought everyone.  I fought all the heavyweights. That’s how I had to make the NHL. Now that I’ve been here and been around this long, I’ve been able to establish myself as a third line guy who can get bumped up to the second line here and there and contribute offensively – with some power play time. So, I think being able to evolve my game into much more than just a fighter, I’ve been able to get away from that part a bit. But, it’s always been part of my game and it always will be. Over the last couple of years I haven’t had to fight as much though. We’ve had some other guys around, Brian being one of them. It definitely lightens the load. But, I’ve still been around to take on a lot of other team’s heavyweights. I look at even last year for instance – I fought Milan Lucic and Shawn Thornton for Boston.  Those are their two tough guys.  For him to say that I don’t fight any tough guys, he’s basically calling his own teammates out when he’s saying they aren’t tough.

It took Kevin Westgarth, the Kings’ heavyweight this year, until the 12th game of the season to find his first fight.  For several weeks prior he had commented that his hands were itching for a scrap – yet, as hard as he tried he couldn’t get guys to engage with him. Do you go through stretches were you feel like that?

I don’t really have that problem too much.  The way I play, I play a physical hockey game and I’m in your face. Getting the opportunity to play against some of the other team’s top lines you’re able to try and get in their kitchen, make them come after you and try to draw some penalties. I think if I’m doing my job right and I’m out against those guys, their tough guy is going to be coming after me. If so, I’m able to engage in a fight more frequently for sure.  As far as just going out and fighting a fourth line guy or a guy who plays three or four minutes, that’s not a great trade off for us.  That’s the way I look at.  Bryan Murray (coach of the Senators) tells me I need to be more patient and pick my spots.  Being around this long I know when I have to and I know when it’s better for team.

[post-game update:  they fought tonight, video link at the end of this article]

Previous generations have had legendary tough guys like Tiger Williams, Dave Schultz and Bob Probert.  Who is the toughest guy in the league right now?

On any given night somebody can get a punch in and drop another guy.  Look at Colton Orr, he’s one of the tougher guys in the league.  The guy from Pittsburgh (Deryk Engelland) ended up one-punching him.  So, on any given night somebody can catch another guy off guard.  One of the biggest guys though is Derek Boogaard (New York Rangers).  He’s a hard guy to reach, especially for a guy like me who is 6’1″.  I did something like that last week when I fought Zdeno Chara (Boston Bruins).  He’s probably as strong as they come and definitely as big as they come.

Neil has only played in one of the last three games when these two teams have met up.  For what it’s worth, he didn’t have a fight in that game.

You have to go back to the December 2005 game (the last time the Senators beat the Kings) to really see a physical presence from Neil vs. LA.  On that particular night he picked up a game misconduct and a major penalty for checking Dustin Brown from behind – right in front of the Kings’ bench.

If things get rough on the ice tonight, it probably won’t be between Neil and Kings rookie Kyle Clifford.  The Colonel lists Ottawa’s tough guy as one of his hockey idols.

On the other hand, if Neil happens to venture into a different kitchen, Chef Westgarth may be more than willing to, um…help him celebrate game number 600.