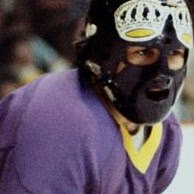 Did you like those vintage purple and gold jerseys the Kings wore on opening night?

Well, they’ll be making their Staples Center debut on Saturday, January 15th when the Kings host the Edmonton Oilers for Rogie Vachon Night.

As noted in the press release – Vachon was the first player to have his number retired by the Kings and amassed several records while tending net for the team from 1971-78, including becoming the all-time leader in games played as a goalie (389), wins (171) and shutouts (32).  He also was named The Hockey News Player of the Year for the 1974-75 season, after posting a 27-14-13 record (including six shutouts) and a 2.24 goals-against-average. After retiring, he eventually served as the team’s General Manager for eight-plus seasons.

On February 26th the jerseys will return for the second Legends Night, this time honoring Bob Berry. He spent seven seasons in LA, including the 1974-75 season when he played in all 80 Kings games while that club earned a record 105 points and 42 wins. Later, he coached the team for three seasons.

The final Legends Night will honor Bob Pulford at the March 19th game vs. the Anaheim Ducks.

note: some of the information in this article comes from the Kings press release