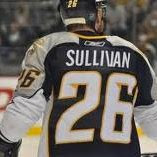 In 37 career games versus the Los Angeles Kings, Nashville’s Steve Sullivan has 10 goals, 23 assists (33 points) and is a plus-nine. When playing at Staples Center, he has eight goals and five assists (13 points) in 15 games.

On the short list of guys known for being ‘Kings Killers’ – a group including Shane Doan of Phoenix and Mike Ribeiro of Dallas – Sullivan has to be near to the top.

MM: Is there anything that motivates you a little more when playing the Kings for some reason?

SS: No, I don’t think so. I had no idea (of his numbers against the Kings).  Those are unexplainable stats.  I don’t know why I have such good numbers against LA.  Maybe I just love California (he laughs).

Some are calling the Predators legitimate Stanley Cup contenders this year.  You lost Jason Arnott and added Matthew Lombardi over this summer.  What else is different about the team that has people thinking this may be better than what you guys have had the last few seasons?

I think our core players – the guys that are 24, 25 years old – are a year older, a year better.  That’s where you can really make improvements, is from within your own group.  We haven’t changed much of the group and there is some accountability and trust that we have within ourselves.  We believe in ourselves.  I think there’s some unfinished business.  We didn’t like the way the season ended last year.  So, a lot of players have a bitter taste in their mouth from last season and don’t want that to happen again.  We should have had better results and want to see better results.

There are a lot of comparisons made between the teams top two defenseman – Ryan Suter and Shea Weber for the Predators, Jack Johnson and Drew Doughty for the Kings.  As a player, do you see any similarities in those four?

Yeah, they’re all All Stars.  That’s the big similarity!  They’re extremely talented defenseman.  They both represent their countries and they’re just high end players.  They’re different players too, individual skill wise.  They all bring something different to the table.  But, I think they all have extremely high end ability in the high execution plays they can make.

What are the keys to the game tonight from your perspective?

For us, it’s to keep it simple.  We don’t want to get into a run and gun with them (the Kings).  We have to play our system and just be gritty.  That’s the way we’re going to win hockey games.  We’re going to win a low scoring affair.  We’re going to have to minimize second opportunities.  Let our goalie see the shots, he’ll make those saves.  If we do that, along with staying out of the penalty box and not allowing their power play a chance to make a difference in the game, then we’ll give ourselves a chance.