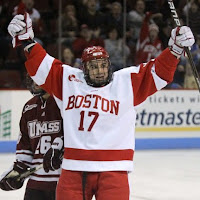 So, it was a little ironic for him when his teammate (Derek Forbort) was selected by the Kings in the first round of the draft this past June.

Perhaps it’s something he’ll get to experience himself though in the not too distant future, as just a few days ago he was one of only three college forwards to be given an ‘A’ rating by the NHL’s Central Scouting Bureau for the 2011 NHL Draft.

NHL.com followed up that information by releasing their initial mock draft results.  For what it’s worth, they had the Kings taking him in the first round next summer.

Already a two-time gold medal winner at the U-18 World Championships, Nieto could also possibly be selected by Team USA for the upcoming World Junior Championships – which would raise his profile even further.

MM:  You started out by playing roller hockey at the YMCA, is that right?

MN:  Yes.  I started when I was three. I signed up at the YMCA and played roller hockey there for a couple of years. From there, I went to ice hockey at age five and didn’t want to go back to roller because I just loved the ice. I played in California until I was 14 when I decided to go to prep school.  I went to Connecticut for a year and then on to the U.S. National Program in Michigan.

Over the last few years that National Program has been getting a lot of attention for turning out good players.  A good portion of their season is comprised of games against the USHL.  Are there any rivalries there or is that more like an all star tour?

I don’t think there are any rivalries per se. Definitely when we played the USHL teams they were out to gun for us because many of them wanted to be where we were. So, whenever we played those games they were pretty intense and those teams wanted to win pretty badly. That put us in a situation where we were playing good competition with a high compete level.

One of your teammates there was Derek Forbort.  How would you describe him to people?

We’re actually really good friends. He’s really chill and likes to relax (away from the rink). On the ice, he’s a good player. he’s really good on the power play and makes strong outlet passes. He’s just a good all around defenseman.

You were at the draft in LA. So, I’ll assume you spoke to him then when he was drafted in the first round by the Kings…

Yeah, I saw him that night and to be honest I was kinda jealous because the Kings are my favorite team. He was really happy though, especially when he heard the fans go crazy from him. He thinks it’s going to be a great atmosphere to play in someday.

When you see guys like EJ McGuire, the head of Central Scouting, saying nice things about you, does that get you excited about being drafted or does it add extra pressure on you to live up to those expectations?

I don’t see it as pressure.  I just see it as compliments and at the most, motivation. It’s a reminder to keep doing what you’re doing and good things will happen.

Prior to the actual draft you’re going be faced with some off the wall questions at the Draft Combine next spring.  Let’s get you ready for that experience with a few here – first off, if you had to leave your house because it was on fire and you could never go back, hat three things would you have to take with you?

I would definitely take my hockey bag and sticks.  I would take my cell phone and probably my laptop.

If you could invite any non-hockey related person to dinner, who would it be and why?

I’d have to take Kobe Bryant because he’s my favorite athlete.  I enjoy his work ethic and watching him play.  I also admire how much of a winner he is.

If somebody was to write a book about your life up until this point in time, what would the title be?

The Life of a California Hockey Player

What three things has hockey taught you?

What one thing are you going to work on the most this year leading up to the draft in Minnesota?

My physical play.  I need to have more hits.

When you make it to the NHL some day, what number do you hope to be wearing and why?

Let’s finish up by talking some college hockey – why or how did you choose Boston University, a school that’s all the way on the other side of the country from your family here is Southern California?

I visited Boston at a young age and I just fell in love with the city. I thought this school was the best option for me. Obviously, the WHL was an option as well. However, I decided to go to school to play against older, more mature guys, who are stronger and faster. The whole college experience is something I didn’t want to miss out on either.

Another advantage of playing there has to be Coach Parker, he’s a legend. What’s something that he’s said to you or taught you that has already made a difference in your game?

He’s an excellent coach who knows the game very well and always brings out the best in me. He always let’s me know how I’m playing and has taught me a lot of positional play so far already. So, I look forward to him teaching me much more as the season progresses.

What’s something else that has been a real positive about attending BU so far, maybe something you didn’t necessarily expect?

Being able to use the facilities at all times of the day. It’s nice being able to go to the rink and shoot puck or skate around when you’re bored or want to work on something specific.

You scored in the first home game of the season. How important was it to get that first goal out of the way early to help build your confidence?

It was definitely nice to get a goal early here at home. Unfortunately I’ve had trouble scoring ever since that goal, but I’ve been working on my shot before and after practice to try and end my drought.

BU is ranked #2 right now (and was #1 earlier in the season). Knowing that, does it put any extra pressure on you individually or the team as a whole? In other words, is it something you guys talk about as you prepare for your opponent each weekend?

Being the #2 ranked team is always nice but we know that the poll rankings don’t mean anything and it’s still the beginning of the year. It doesn’t add any pressure individually, I just try to do my job each game and that’s all I can do. As a team, we just focus for each game one by one and are trying to stay undefeated.

They’ll need that sort of focus tonight when his Terriers begin a home-and-home series with the #7 ranked New Hampshire Wildcats. Then, in two weeks it’s a big series with long time rival (and defending National Champions) Boston College.

In mid-December Team USA will announce who they’re bringing to New York for the final World Junior Championships evaluation camp. He may be part of the initial group of 28 players that eventually gets whittled down to 22 by the time the tournament officially kicks off on December 26 in Buffalo.

A few months later, Nieto will play in the Beanpot Tournament, an annual February tradition in the great city of Boston – featuring BU, BC, Harvard and Northeastern.

So, write the name down – Matt Nieto. If things go his way, you’ll be hearing a lot more about him prior to the draft.  And perhaps even after it…

According to one report, Kings scouts Bob Crocker and Mark Mullen have already taken in at least one BU game so far this season.