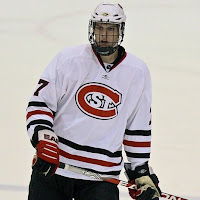 At the NHL Draft this past June, where the Kings were expected to go after skilled forwards, they bookended their five picks by taking two more American-born defenseman. The pair were also off to college as well, with first rounder Derek Forbort recently beginning his freshman year at North Dakota and Kevin Gravel (fifth round) starting up at St. Cloud State.

Two weeks ago we checked in with Forbort.  Now it’s time to see how college life is treating Gravel.

Before we do though, make sure you get it right.  It’s Gravel, as in gra-velle…not like the stuff used to make city streets.

MM:  You grew up in Kingsford, Michigan – so it was probably only natural that you’d get drafted by the Kings…

KG:  It was only natural, right?

Prior to the draft you blogged about your experience at the scouting combine for the USHL website.  You wrote that some of the teams were intimidating to interview with.  Tell us about that…

The most intimidating part was walking into the room and seeing eight or nine guys just stare back at you and firing off questions.  Some teams were down to the point, others were more laid back.  Los Angeles was kinda in between.  They wanted straight answers, for sure.

How about the weird questions?  They come up every year at the combine…

I think the weirdest one I had was ‘Would I prefer a well written poem or a well crafted gun?’  I didn’t really know how to answer that one.  I said “I don’t really have any use for a gun, I don’t hunt or anything like that.”  So, I said I’d probably take the poem.  I don’t know if that was the answer they were looking for, but that’s what I came up with.

After being drafted by the Kings you came to the prospects camp and your roommate was Derek Forbort.  How well did you get to know him during those few days?

Well, we were both pretty beat at the end of every day.  I think we went to bed at about an average of 8:00 every night.  We’d sleep, get up and be ready for the next day.  I got to know him a little bit though.  He seemed like a pretty good guy and he’s obviously very talented on the ice.  I think we got along pretty well during the week.

What was the one bit of advice that a coach gave you at the camp that stuck with you when you left?

They said this is where the real work begins now.  All that stuff that has lead up to this point, I’m going to have to work even that much harder to try and make it.  There a lot of guys that get drafted who don’t make it (to the NHL).  It’s going be much harder now and I have to put in that much more work to make it.  They said it’s basically in my hands now.  If I work hard enough and if I want it bad enough, then I’ll have a chance.

Now that it’s been several months later, have you studied up on the Kings a little?  Do you know some of the past players and/or are you following the team this year?

I try to look at the scores every night from around the league, including the Kings.  I follow the whole NHL.  But, I definitely pay attention to how the Kings are doing.

College hockey isn’t nearly as big here in California as it is in the Midwest or even out East.  Give everybody a little local flavor – what is St. Could State all about?

Well, here at St. Cloud State hockey is the biggest sport.  It gets the biggest following by far.  The program has consistently been getting better and we have pretty high expectations this year.  We have a good team and I think we’re only going to get better as the season wears on.  In terms of the set up though, all the freshman hockey players live in the same dorm.  We’re all roomed up with another hockey player.  But, we’re in a dorm that’s also full of regular students too, not just athletes.

You’re dad played there too, so is it safe to assume he’s been the biggest influence in your hockey career so far?

Hands down.  He taught me a lot about the game.  He knows the game really well.  He knows what he’s talking about, so I talk to him after games and stuff like that.  He’ll tell me what’s on his mind without beating around the bush.  He’s definitely the biggest influence.

Most coaches and scouts rave about your defensive play and they usually add in something like ‘still developing his offense’ – is that something you agree with or you do you view yourself as more of a defensive defenseman?

I would say I’m definitely more on the defensive side.  I try to take care of my defensive responsibilities first.  But, at the same time, I’m working on offensive abilities.  I think I do still have untapped offensive potential.  I think I skate pretty well for my size (6’4″), so that gives me the ability to jump into the play when I get a chance.  I would prefer to take care of the defensive zone first though.  I pride myself on my defense.

This weekend you guys have a series against Nebraska-Omaha, a tough conference opponent.  Did you know the Kings have a guy on their roster this season that played there?

[note: Dean Lombardi would be proud…I explained a little about the legend that is Scott Parse (he of “top three skill”)…he led the team in scoring all four seasons, set the school record for rookie scoring with 35 points (16 goals, 19 assists) and helped the team reach the NCAA Frozen Four tournament for the first time in school history]

You’ve played for Team USA a few times, including a trip over to Slovakia for a tournament.  Guys usually come back with some interesting food stories from those adventures.  What was the strangest thing you had to eat?

I would say the soup.  They ate a lot of soup, but it was a really weird soup.  I don’t even know what was in it.  We had soup with every meal so it got pretty old towards the end of the week.  But we had to eat it or we’d go hungry.

Staying with USA hockey, who would you pick – Jeremy Roenick or Mike Modano?

I’d go Modano.  He started off in Minnesota and he has a great legacy here.  He’s a great player, a great leader and a great type of guy.

Gravel and the St. Cloud State Huskies (4-5-1 overall) are home this weekend to take on the Mavericks of Nebraska-Omaha, who are currently ranked #7 nationally and have an overall record of 7-1 (4-0 in conference play).

Then, the first weekend of December is the big showdown.  Gravel and team will be traveling to North Dakota to take on fellow Kings prospect and his former roommate, Forbort.

We’ll have more on that when the time comes.

For now, let’s see who has bragging rights this weekend, Gravel or Parse?