You are here: Home / hockey / DIY Surgery An Option For Scott Parse? 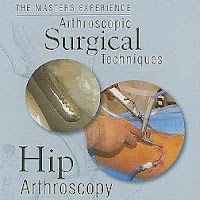 Getting away from the Xs and Os of hockey for a minutes, we’ve stumbled onto something rather interesting.

Yesterday it was announced that Kings left wing Scott Parse needed surgery to repair a torn labrum in his hip. The operation will be performed Dr. Byrd (Nashville, TN) – the recognized leader in hip surgeries for athletes and the man credited with pioneering the technique for performing arthroscopic surgery on the hip.

However, perhaps Parse should just opt to do it himself.

It seems for the paltry price of $191 you can purchase Dr. Blum’s double-DVD instruction manual. Simply add it to your Barnes & Noble cart by clicking here.

The product description promises to “guide users from fundamentals through complex interventions.” Need more motivation?  How about this – “The goal is to provide an independent study program that will advance users along the learning curve of hip arthroscopy.”

One thing is for sure, if Parse opts for this ‘alternative’ form of treatment, we are definitely going to have to update the 10 Tidbits on Scott Parse article.

In all seriousness, hip disorders are becoming both easier to diagnose and treat, said Dr. Byrd at a recent Sports Medicine Conference. “In the past, many of these athletes fell off our radar screen,” he said. “Many of these disorders went unrecognized and untreated. Athletes were simply resigned to living within the constraints of their symptoms, which usually meant giving up their competitive athletic careers.”

A torn hip labrum can be extremely painful, especially for hockey players, who pivot and twist a lot in the hips. Labral tears do not have a lot of bloodflow and oxygen, thus they can be difficult to tolerate. Dr. Byrd’s website states ‘Labral tears may occur from an acute injury such as twisting, but often occur as a consequence of repetitive activities and can happen simply as a result of degeneration or deterioration of the cartilage.’ Hence the need for surgery.

In recent years, athletes from across the sports spectrum have had hip surgeries – including Alex Rodriguez of the New York Yankees and Kurt Warner of the Arizona Cardinals – and been able to continue their careers just fine.

On the hockey side, Dr. Byrd has also been the go-to-guy for the Philadelphia Flyers organization, having performed on several former (Simon Gagne, Randy Jones) and current (Braydon Coburn, Matt Walker) members of the team.

He was also consulted by the Dodgers on catcher Russell Martin’s possibly career ending hip situation.

Parse is expected to be sidelined 3-4 months.

10 Tidbits on Drew Doughty – includes picture of his first hockey card, at age 4

10 Tidbits on Wayne Simmonds – all aboard The Train