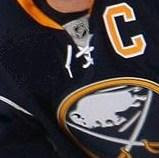 Relax, this isn’t an article designed to bash Rob Blake.

Nor is it a story about the Kings 4-2 loss in Buffalo last night.

It is about the Sabres though. More specifically, their coach and his parallel to Blake.

Let’s begin with a preamble…

Rob Blake was a great player for the Kings for more than a decade during his first stint in Los Angeles. He was part of the NHL All-Rookie Team, won the Norris Trophy and put up numbers that make him one of the best defenseman in the history of the franchise. He went on to win a Stanley Cup and is without a doubt a first ballot hall of famer.

Now, that said, there was one move that will forever cause some controversy in LA. Prior to the Kings first pre-season game in September 2000, mired in a contract dispute, Blake resigned the captaincy after receiving what he believed to be a take it or leave it offer from the organization.

After giving up the ‘C’ Blake told the LA Times “I take a lot of pride and responsibility in being the captain, and when you are told you might not be around for the whole season, it’s extremely difficult to do the job. Rather than it being a distraction later on in the season, it’s best that someone take it on now.”

That’s not exactly how I’d put it. And that’s not what I expect from a captain. But, maybe that’s just me. Different conversation for a different day.

With that quick back story in place, here’s the connection…

Just a few weeks ago Sabres coach Lindy Ruff was the toast of the league. In fact, prior to their game on Wednesday, November 10th an NHL.com article noted “Ruff, currently the longest-tenured coach in the NHL, not only will become the 18th coach in NHL history to reach 1,000 games, but only the third (coach) in League history to reach that milestone with the same team. Only Billy Reay (1,012 with Chicago) and Al Arbour (1,500 with the New York Islanders) have coached one team more often; Ruff will be the first man to coach 1,000 games in the NHL with only one team.”

However, what the article failed to note was one other key piece of Ruff’s history in Buffalo.

After being drafted in the second round by the team in 1979 he patrolled their blueline for more than 600 games over a ten year span. Then, in February 1989 he resigned the captaincy of the Buffalo Sabres following a game in which he was benched.

A few days later he was traded to the New York Rangers and just 83 games later his NHL playing days were over.

So, yes, their careers took different roads post giving up the ‘C’. Yet, it is interesting to think about…

Should highly respected leaders be so quick to take their ball and go home when things don’t go their way?