You are here: Home / AHL / Word Association with Jonathan Bernier 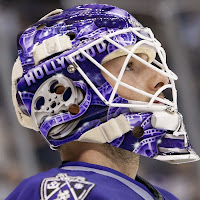 Things are slowly coming together for Jonathan Bernier. He’s officially part of the LA Kings…finally! And although it wasn’t pretty at times, he picked up his first win of the season on Wednesday night vs. Carolina.

For the last two years he was with the Kings AHL affiliate in Manchester, where he was ‘learning how to be a professional’ as hockey executives like to say. His old club, the Monarchs, are back in the news today as Erik Ersberg is set to exit the organization (leaving for the KHL) and Bernier’s back-up from a year ago, Jeff Zatkoff, will become the full-time starter there.

In the interview below, Bernier gives us his perspective on Zatkoff, talks about some advice he received from Ron Hextall, explains how Dustin Brown has matured…and of course, plays word association using some of his current and former teammates.

MM: Zatkoff came to the Monarchs last year after a good season with the Ontario Reign (ECHL) in 2008-09. How would you describe the guy patrolling your former crease in Manchester this year?

JB:  He’s a great goalie.  He has a lot of skills.  I think he’s going to have a great year in Manch actually.  The guys like him too and that’s really important as a goalie.  The guys have to respect you and I think he has that from the team.  I’d say we both learned from each other last year.  He probably wishes he played more games.  But, I wish I did too.  It was probably the first time I had really good chemistry with the other goalie.  I think we’re close friends.

You’ve received some mentoring from Rob Hextall along the way.  What’s the best advice he’s been able to give you?

Control what you can control, don’t worry about all of those little things I was worrying about my first year in Manch.  It’s always easy to say, but it’s really hard to do.  We had a long talk towards Christmas time my first year there and I think it really helped me.  It opened my eyes.  After that, I got in some good games in the second half and kept rolling the same way through the summer and throughout last season.

When you first came up in 2007 the Kings were still a young team.  Take a guy like Dustin Brown, obviously he wasn’t the captain then – but, how is he different now vs. the guy you saw in ’07?

I didn’t really play with him long enough the first time to know a lot of things about him.  However, the first thing that comes to mind is he’s a true leader.  He works so hard, on and off the ice.  That’s the type of guy you want on your team.  I can tell that a lot of guys around the league respect him a lot more now than they did just two or three years ago.

If Bernier plays like the goalie he was last year in Manchester, plenty of guys in the NHL will have a whole new level of respect for him too by the season’s end.

What To Do with Martin Jones?