You are here: Home / NHL / Capitals / Two Minutes In the Box… with Willie Mitchell 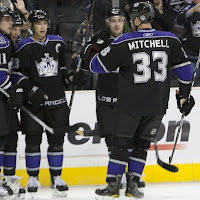 It seems like nearly every team in the league is always looking to add another top-six forward and a quality defenseman.

Over the summer, the Kings were in that same position. So, while the Ilya Kovalchuk negotiations dominated the early headlines, perhaps the deal deserving equal attention was Dean Lombardi’s ability to acquire Willie Mitchell.

The Kings GM loves to compare hockey to baseball and in MLB it’s said that pitching wins championships. In the NHL, it’s defense (and goaltending…and your centers…but, hey, that wouldn’t make for a good story).

Mitchell was coming off a serious concussion that forced him to miss the second half of last season. Just hearing that worried Kings fans who know all too well about how things turned out with players like Jason Allison and Adam Deadmarsh.

Perhaps this was different. Premier teams in the league – such as the Washington Capitals and San Jose Sharks – were also heavily pursuing the free agent blueliner. Low and behold, he signed in LA, making a strong defensive core even better.

Below are some comments from Mitchell about how he’s fitting in with the Kings, what he’s learned about Drew Doughty and the play of young Jake Muzzin…

MM:  Any thoughts so far after a few games here with the Kings?

WM:  Well, we beat a pretty good hockey club in Vancouver twice.  We feel good about that.  It’s still early though, so it’s hard to say anything.  We’re just working on getting our system better, playing within that system.  When you do that and you still have off nights it gives your team a chance to win.  When you play your system really well, you can fall back on it.  I always relate it to a building.  If the whole building (crumbles) just because one beam fell down, then it’s not built very well, right?  A team is the same way.  If a couple of guys have an off night, you should still be able to win because your structure is your foundation – it holds you together.

It’s always different from the other side – any observations on what you’ve seen from Drew Doughty as a teammate?

I didn’t know him as a player at all.  Seeing him on a daily basis, I think what makes him such a great player is his passion for the game, his love for the game – he loves being out there and he loves enjoying it.  He loves competing, that’s probably the number one attribute of all great players.  His first four or five strides are exceptional.  I didn’t know he was as much of a physical player as he is.  He’s plays the body pretty well down the wall.  His shot, I had no idea either – in Vancouver we’d see him a couple times a year, but when you’re playing, you’re concerned about your game.  You not really watching other players as much.  But, his shot is exceptional, it’s great.  He keeps it about a foot-and-a-half to two feet off the ice, which is perfect because most goalies are butterfly goalies, so it just goes right above it.  Those are the three things that jump out the most to me.

How about Jake Muzzin – what have you seen from him so far?

I think he’s doing alright.  It’s not an easy position to be in when you’re that age.  You want to come in and impress, I did the same thing.  What you want to is show that you belong and sometimes you can press too hard and do too many things as a player, when you’re young like that.  When you make mistakes as a defenseman, everybody sees them – it’s not like a forward.  Forwards can make mistakes all day long out there and really they’re covered up by the defense and the goaltender.  When they make a mistake it’s not in the back of the net.  When we make a mistake it’s a goal, unless we get bailed out by our goaltender.  So, it’s not an easy position to be in.  But, he moves the puck well and he’s much like any new player, he’s trying to find his way.

You played in front of an upper echelon goalie in Vancouver, with Roberto Luongo – what’s it been like to have Jonathan Quick in net behind you this season?

Coach Terry Murray is hoping to see more of that type of play from Quick tonight, when he returns to the line-up against the Phoenix Coyotes.

As for Mitchell, he’s probably hoping that if he makes any of those mistakes he talked about, Quick will be there to bail him out.

Prospect File: The Buzz on Muzz – teammates and executives speak out on Jake Muzzin