You are here: Home / NHL / Avalanche / Two Minutes in the Box… with Wayne Simmonds 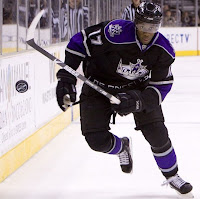 Whenever trade rumors involving the LA Kings come up lately, one of the first names mentioned is Wayne Simmonds.

And why not? Teams love players like Wayne. He’s young, physical, very coachable and continues to improve each season.

Two years ago he burst onto the scene – forcing his way onto the Kings according to coach Terry Murray and GM Dean Lombardi. Last year, in his second NHL season, he posted 16 goals and 40 points (nearly double the output of his rookie campaign, nine goals and 23 points). Even more impressive, he led the team with a +22 rating.

However, he’s yet to pick up a point in the first three games so far this season. Perhaps that will change tonight against Vancouver.

Over the summer you were on the cover of The Hockey News.  Growing up in Toronto, I’m sure you read that magazine a few times.  What did that mean to you?

I thought it was pretty special, for Chris Stewart (of the Colorado Avalanche) and I to get the cover.  They came and followed us for a day.  We got our story out and it’s good for younger people with similar situations to know they can make it, they just need to be positive and they just need to stick to it.

Had you been in discussions with the magazine for a while or did the whole thing come out of left field?

Honestly, it just came out of left field.  My agent called the two of us – Stewy and I live together in the summer.  So, he called us and literally, two days later they came out.  We weren’t really expecting it, but it worked out well.  I thought the article was well written.  I liked it and so did my parents.  So, that’s all you can ask for.

At some point though, do you become tired of talking about the minority story and just want to talk about being a hockey player?

Sometimes it becomes a bit of an annoyance.  But, it’s always good to know where you came from.

Besides the magazine piece, what else were you up to this summer – away from the rink?

I stayed home a lot actually.  I bought a house this summer.  It’s my first homeowner experience.  I didn’t realize after purchasing a house all the bills that would come, plus the furniture you need and that kind of stuff.  It all went well though.  I only live about two hours away from Doughty.  So, we spent quite a bit of time together, hanging out.  That was pretty much my summer.

Dave Torrie (GM of the Soo Greyhounds) traded three assets to get you, so he obviously thought pretty highly of you.  Any memories of your limited time there?

He traded for me in my 19-year old year.  I thought I helped the team out a little bit.  I had a great time in the Soo.  It’s a first class organization.  I had a blast playing there for the half-year that I was there.

Several of the guys you played with in the Soo were in camp this year.  Even though you were only with the Greyhounds for a few months, when you’re together with those guys, do you still feel a bond with any of them?

For sure.  I know Muzz (Jake Muzzin) real well.  Dylan King was here too.  Jordan Nolan – I never played him there.  But, he’s a great guy too.  We all talked about the Soo together, when we played there…we definitely reminisced a little bit.  I played in Owen Sound too.  So, I still check the websites for both teams and try to keep up with what’s going on.

Your somebody who appreciates the physical side of the game.  This year the Kings have added Kevin Westgarth.  Even though he hasn’t had a scrap yet this year, you’ve seen him tussle before.  Talk about what he brings to the team.

Westie’s a beauty.  I can’t say enough good things about him.  He’s a warrior and a great team player.  He stands in there when he fights, so every fight he has is exciting.  Every time he does fight he gets the boys going, he always gets his hair going or he gives a clap or something like that.  It’s great to watch.

With the Canucks in town tonight, there’s a good chance Westgarth will have an opportunity to get that first fight of the season under his belt.

Who knows – maybe Wayne will get his first point tonight too.

Wayne Simmonds in The Hockey News