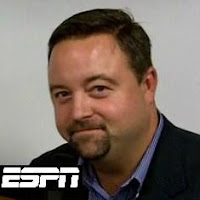 So, you think you love the Kings?

Well, if you live in LA, you’re thinking too small.

Pierre LeBrun is taking his admiration all across the U.S. and Canada via outlets like ESPN and the CBC’s Hockey Night in Canada.

The veteran hockey journalist has some serious love for the Kings this season and he’s not shy about it. Even though he’s a self-admitted metal head, due to his soft spot for John Mellencamp let’s just say that what he’s feeling for the Kings right now Hurts So Good.

In this exclusive MayorsManor interview he shares his opinions and discoveries from a recent trip through camps in Phoenix, Los Angeles, San Jose and Vancouver. It’s the latest in our Season Preview series – today we’re joined by Pierre LeBrun…

MM: As you went on your training camp tour, what was the most surprising thing you observed with the Kings?

PL: I was a bit surprised, and actually I think it’s a good decision, that Dustin Brown was back on the top line. They had sort of gone to so much effort to make him a second liner last year and had really stuck to that. Now they’ve loaded up with him and Ryan Smyth and Anze Kopitar. I just wonder with Dustin, after spending so much time on a terrific second line last year, why the sudden change of heart? Perhaps it’s a byproduct of not signing Kovalchuk. Maybe they wanted a little more offensive direction from Dustin. This will certainly give him a better chance of doing that, by playing with those two great offensive players.

How about over in Phoenix, that’s a real hodgepodge of parts the Coyotes have right now.  Did you get a sense of just how ready any of their young blueliners might be?

That’s going to be an area of concern for them.  In a perfect world, they probably would have wanted to give Oliver Ekman-Larsson another year to develop.  But, Michalek left July 1st and was not replaced.  They still have a pretty solid top-4, with Morris, Jovanovski, Aucoin and especially in Keith Yandle – he’s a real emerging star.  After that, it really drops off.  No doubt, there’s no doubt Ekman-Larson is going to be a player.  The question is whether he’s ready now.  From the days I spent in their camp, that was something there was a lot of internal debate on.  If he’s ready, that’s a big break for them because they have a gaping hole with Michalek gone.

The Sharks announced earlier this week that Joe Thornton will be their team captain this season.  It’s sort of a surprising move, considering he’ll be a free agent next summer.  With Rob Blake gone from the team now, who do you see as the real leader in San Jose?

Two guys stick out for me.  One is Dan Boyle, an emotional guy who speaks his mind in good and bad times.  He is absolutely the team spokesman.  He’s always been that way, even in Tampa Bay.  Another guy that I think is leading by example, with how clutch he’s already been in his young career – both for the Sharks and Team USA, is Joe Pavelski.  He let his play do the talking last year in the playoffs.  He was just uncanny, always seeming to score late to tie it or even in overtime.  That’s another form of leadership.  Eventually, Pavelski will be captain of the team.

Another captain, Roberto Luongo up in Vancouver, lost his ‘C’ this summer.  Was that a necessary move for the Canucks to take the next step forward or is this really just a story that the media and fans like to talk about?

I do think it was a little more media and fan driven than what it was realistically.  Except that, even Luongo when I spoke to him, said that perhaps subconsciously he was thinking about what he was going to say, as team captain, after the game.  It’s pretty amazing to hear that.  As team spokesman, it put Luongo in some interesting positions some nights – when the reality was he defense was brutal, but he couldn’t say it because it would sound selfish.  I think, in the end, he did find it a bit cumbersome to have to speak for 23 guys.  It’s an unusual position for goalies, unless their name is Patrick Roy.  In the end, I think it was a slight distraction – not nearly as big as everyone made it.  In a market like Vancouver, the team captain has to talk twice a day on game days and once a day on off days.  So, that’s a lot of talking he won’t have to do now without the ‘C’, or at least not as often.

Many media folks are predicting the Canucks will win the Stanley Cup this year – so we’ve already heard why they WILL win it, tell us why they WON’T win the Cup…

Luongo still has to prove that come playoff time he can be that same great goalie he has shown in the regular season and that he’s shown a couple of World Championships.  In ’03 and ’04 he was unbelievable, leading Canada to gold.  But, he has yet to translate that really, especially in the two playoff losses to Chicago in back-to-back years.  That would be one of the reasons.

Another would be, while I do like what they’ve done with Ballard and Hamhuis, essentially replacing Sami Salo and Willie Mitchell – we’ll have to see what those two can do in Vancouver.  They’ve never played in a market like this, to begin with.  They’ve never really been in a top pairing either, a one-two.  So, there is a lot of pressure on these two young guys.  They’re being asked to do a lot.  That’s still an X-factor as to whether they’re ready for this role.

The two coaches in the Western Conference who are probably on the hot seat more than anybody as we start the season are Marc Crawford in Dallas and Randy Carlyle in Anaheim.  Do you think both of those guys can survive the whole season with their jobs?

Mathematically, I cant imagine anybody being fired in Dallas because there isn’t an owner to pay the new guy or the old guy.  I think Randy Carlyle is one of the best coaches in the league.  But, he’s been there a long time and even Scotty Bowman had to exit some stops along his legendary career.  We might be getting near that time with Randy.  He does have a real close relationship with GM Bob Murray.  So, that’s certainly on his side.  However, right now I’m not too sure how enamored Saku Koivu and Teemu Selanne are with the prospect of being separated, with the idea of  Bobby Ryan playing center.  That’s a real interesting gamble, on and off the ice.  On the surface, I think it’s the right decision to put a big star like Bobby Ryan at center.  Or at least try it out, maximize your assets.  But, Koivu and Selanne did come back purposefully to play together one more year.

Rank these three captains, from one to three – Shane Doan, Dustin Brown and Brendon Morrow…

Which is going to be the better third line this year – Detroit (with Hudler, Modano and Cleary) or Los Angeles (with Simmonds, Handzus and Ponikarovsky)?

I’m going to go with the LA line because Modano will have pulled a groin by Christmas.

Who will have more points this year – Ponikarovsky or Frolov?

Frolov.  They don’t play any defense in New York.

If you could only have one of these three players, who you take – Ryan Kesler, James Neal or Anze Kopitar?

I’d have to go with Kopitar right now.  Of those three, he’s the only pure-bred number one center right now.

If you were a GM in the Western Conference and had your pick of these three goalies, who would you take – Turco, Niemi or Luongo?

No question, Luongo.  He’s had his up and downs, but let’s not forget he was in goal for the most pressure packed game in the history of hockey, last February in Vancouver.  You’d have to be Canadian to understand, that really checked your temperature if you’re a human being.  And he delivered.  He wasn’t very good against Chicago, but I think people forget what he did for Team Canada.  He’s still a great goalie and I’d go with him.

Conventional wisdom says that Dean Lombardi is going to try and add a piece to the Kings at some point over the next couple of months.  Go out on a limb here, who is somebody you could realistically see coming to Los Angeles in a deal?

I’ll give you one name for sure.  If the Calgary Flames flame out, no pun intended – and decide that they need to rebuild and blow up their team, I wouldn’t be surprised if Dean Lombardi phoned Calgary about Jarome Iginla.  That’s certainly up his alley, in terms of a character guy that brings that to a dressing room.  Obviously, he’s a star quality trigger man.  So, he’s a name.  Again, only if Calgary is totally out of it.  But, I think LA would sniff around.

Wait a minute, has Pierre been reading my tweets?  Didn’t I type that exact same name several months ago?

He predicts the Kings will win the Pacific Division and has Vancouver atop the Western Conference regular season standings.  For some reason, he likes the Sharks to make it to the Stanley Cup Finals this year.

As for me – well, my predictions will be posted tomorrow afternoon…just hours before the Kings take to the ice in Vancouver.

Yes, hockey is almost back.