You are here: Home / NHL / Coyotes / Ryan Smyth on the almost-King, Ray Whitney 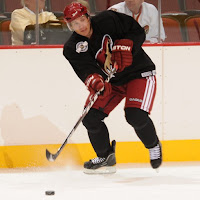 For the first time in…well, a really long time…the Kings were buyers at the NHL Trading Deadline last season – instead of the sellers the team had become the last five plus years.

Rather than trading away players for future assets, they acquired two rentals for a playoff push, Freddy Modin and Jeff Halpern. Neither were bad players, just not the player they coveted most. Ray Whitney, playing in Carolina at the time, was a key guy targeted by GM Dean Lombardi.

Fans in Los Angeles know him well, as he’s spent much of his career in the Western Conference – having played in San Jose, Edmonton, Columbus and Detroit.

Tonight, the Kings will see Whitney’s familiar face in Phoenix – where he signed a two year free-agent contract during the off-season.

However, a few months before becoming a Coyote, there were many rumors floating around that a deal for Whitney was real close.

How close? Well, Kings forward Ryan Smyth played with him this summer on Team Canada’s squad at the World Championships in Germany. Let’s see what he heard…

MM: When you were with Whitney over in Europe, did the trade deadline rumors come up at all?

RS:  I surfaced it a bit.  Nothing came about.  He was willing to waive it (the no trade clause), but he was thinking of his family at the time.  He thought we had a good team.  He would’ve come. But, something happened…

[note: TSN’s Bob McKenzie reported trade talks were far enough long that Carolina did give the Kings permission to speak with Whitney’s agent about a contract extension, but he wanted three years – too many for LA’s taste]

Not many people had you penciled in for Team Canada again.  Were you surprised to get the call and how much hockey did you feel you had left at that point, after the long season?

Obviously I had a few injuries throughout the year.  I broke my rib last season and then came off of that not too bad.  Then, getting into the playoffs is always exciting, especially with that energy.  But, anytime you get a call from your country it’s a thrill.  With a former Oiler heading it up, Mark Messier, and the coach being Craig MacTavish, my coach in Edmonton – I have a lot of respect for those type of players and for Team Canada, for that matter.  The youth and the excitement that they were bringing over was awesome.  I know Ray Whitney and I were the older guys, we relish those type of things and those opportunities.  It was unfortunate things ended for me with the injury.

Smyth, who had previously been named the captain of Team Canada, missed the second half of the World Championships after fracturing his ankle in practice.  Whitney wore the ‘C’ for the remainder of the tournament.

The original estimate of a four to six week recovery time on the injury looks to be accurate.  Although some may have been concerned over the summer, he appears to have healed up just fine.

Through five games, Smyth is leading the Kings in points (six) and after scoring again last night, is also tied for the lead in goals (three).

He’ll get a chance to add to those totals later tonight against the Phoenix Coyotes and the almost-King, Ray Whitney.

What Shoulda Been – Ryan Smyth vs. the Oilers