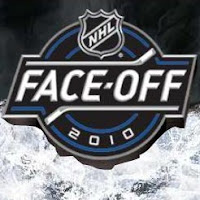 They say it’s best to go out on a high note. John Elway did it. Very few others have.

In my case, some probably think I should stay away from predictions from this point forward.

Prior to the puck dropping on last season, I perfectly called the Kings finishing in sixth place (link is here for you Doubting Thomases). Most thought I was crazy for even thinking that at the time, as the mainstream hockey media had the Kings sneaking in around 8th…if they even made the playoffs at all.

Boy have times changed. The Kings are one of the trendy picks coming into this season. It’s hard to believe, yet some even have them winning the Stanley Cup this year. Now, I’m not going to go that far (just yet).

However, after carefully reading the tea leaves, consulting with Sylvia Browne and having my palm read on Venice Beach yesterday, I’m ready. Below are my predictions for the 2010-11 season.

What if… they experience a rash of injuries again, like last season?  Will that be enough to finally clip the playoff wings of the infamous Detroit hockey club?  I doubt it.  They showed last year that you can basically run this team over with a Mac truck and they’ll still find a way to post 100 points.  Jimmy Howard is rock solid.  The defense is always strong.  They should be healthier than they were in the first half last year and they added Mike Modano.  He’s motivated to prove he wasn’t done yet.  I’d put him on my third line any day of the week and twice on Sunday gameday.

What if… their new defense isn’t as strong as last year’s version?  It’s possible.  It’s also possible that Sedin #1 doesn’t play the same with Sedin #2 back in the line-up.  It’s also possible that Luongo spends the year looking more like the goalie he did in that 8-3 shellacking in LA last year than the goalie he was at the Olympics.  Any of those is certainly possible, but not probable.  If the Red Wings slide at all, the Canucks will be there to take the top spot in the West.

What if… they hadn’t signed Niemi?  Would they have still won the Pacific Division this year?  I’m not so sure about that.  That move (call it luck) gave them just a tiny advantage here.  I’m also not sure about Joe Thornton as the captain of this team.  Nearly everybody in that locker room likes to talk about there being a group of leaders on this team, not just a single person.  I’m not sure I buy it.  Yes, they win – a lot of regular season games.  But, who is the leader of this team?  Who is going to put the team on his back when they’re up against the wall?  Who knows, mark it down as TBA.

What if… Dean Lombardi adds a high-end piece to the puzzle sometime between opening night and the trading deadline?  Well, last year I said they could finish higher than sixth place if he added such a player.  He didn’t and they finished right where I thought.  That’s not a criticism, just an observation.  Entering this year, I have a similar feeling.  Right now, they should finish in fourth.  If Lombardi tweaks the roster in a significant way, this group will challenge the Sharks…and probably overtake them for the Pacific Division.  Seeing the Kings finish the year in second place overall is not out of the question.

What if… there wasn’t a salary cap?  Well, then this team would be a one or two seed.  There is, so they aren’t.  I get that the core is still there.  But, I’m a high character guy.  They’ve lost their grit – or, I think we’re supposed to call it sandpaper these days.  The defense enters the year banged up too.  I’m high on Marty Turco too.  That will help.  However, can he get it done at this point in his career?  Overall, they enter the season with too many questions to slot in higher than fifth.  By March though, I expect this to be a completely different team than the one playing in October.

What if… this team actually had money to spend?  From the goal out, they look solid…until you get up front.  Between the pipes, Pekka Rinne could be the most under appreciated goalie in the league.  If you want a young defensive pairing to rival the Kings’ Doughty and Johnson, look no further than Ryan Suter and Shea Weber (also a Can-Am duo).  It’s the scoring that worries me.  Last year they only had two players post more than 20 goals (Patrick Horqvist and Martin Erat) – both are right wingers.  Where is their big center?  Jason Arnott left and Matthew Lombardi came over from Phoenix.  That’s not enough to move them higher than sixth place.  They’ll still win plenty of games though due to their goaltending and defense.  They’re the tweener team in the West.  Not good enough to be part of the top five, clearly better than all the teams below them.

What if… Montreal didn’t trade Jaroslav Halak to the Blues?  Then St. Louis may be on the outside looking in this year.  Like nearly every year, seeds 7-10 are almost interchangeable.  The addition of Halak (Bernier’s former teammate in juniors) should be enough to help a Blues team poised for a bounce back year.  They’ve lost Kariya and Tkachuk, both veterans who were on the downside of their scoring peaks.  Their young talent continues to develop at a steady pace.  However, to make some noise in the second half of the season, they’ll need a breakout star.  Any team being led in points by Andy McDonald probably doesn’t strike fear in the teams listed above.

What if… GM Don Maloney was able shop at Saks, instead of KMart?  As has been written everywhere, the loss of Zbynek Michalek will hurt this team.  Losing Lombardi will also probably hurt the Coyotes more than it will help the Blues.  Adding Eric Belanger will help here more than most realize.  He is among the best face-off guys in the league, probably top three.  Even though he probably won’t score 30 goals, the ones he does put in the net are usually timely.  Finally, any team with Ilya Bryzgalov in net has a fighting chance each team they take the ice.  Here’s a what if… What if they never picked him up off waivers from the Ducks?

What if… somebody could actually explain them bringing back Olli Jokinen and Alex Tanguay?  If so, it might be a little easier to get a read on this team.  Their goaltending is probably the only difference maker placing them a notch ahead of the next few teams to follow. Their offense is still highly questionable though.  Which is probably the difference maker when it comes to them not making the playoffs.

What if… this team hadn’t gotten off to such a hot start last year?  People wouldn’t even be talking about this group as a playoff team this year.  Yes, Matt Duchene is an incredible young talent.  And sure, one of their executives wanted to bend my ear in Vegas last weekend about guys like Phillippe Dupuis and Brandon Yip.  However, they don’t have a true stud on defense and I’m not sold on Craig Anderson in net.  That said, it is a contract year for Anderson.  So, perhaps, he’ll perform better than projected.

What if… they actually had some defense?  They might challenge for a playoff spot.  Maybe.  They gave up 243 goals last year, only one better than Dallas in the Pacific and only good enough for 22nd in a 30 team league.  I see nothing they’ve done in the off-season to make them significantly better.  If Cam Fowler is the second coming of Drew Doughty, maybe.  If Temmu or Koivu start to show their age, maybe not.

What if… Brenden Morrow played on a more visible team?  He’d be one of the top-10 superstars in this league.  A pure warrior, similar to Jeremy Roenick of a generation earlier.  Steve Ott is highly underrated as well.  Brad Richards is playing for a huge contract next summer.  Those are the positives.  On the flip side, the goaltending is probably middle of the pack – much like this team.  Behind the bench they’re lead by Marc Crawford.  And that’s never a good thing.

What if… this was the 2013-14 and not 2010-11 season?  Then, the Oilers would be solidly in the playoffs.  This is a team on the rise.  They have so much young talent it’s almost hard to keep track of it all.  If they had a goaltender in their system that was capable of rising up with a Calder-like season, then it wouldn’t be such a stretch to see them challenge for a playoff spot this year (that’s right, I said it).  However, they don’t have that player, nor the defensive depth just yet.  This may be one of the most exciting teams to watch this season.  But, the playoffs are not within their grasp.

What if… GM Chuck Fletcher was allowed to bring Sidney Crosby or Evgeni Malkin over with him when he joined the Wild, after three years in Pittsburgh?  The answer is obvious, they’d be a much better team.  Neither happened, just like the Wild won’t even be close to the playoffs.  Like every team on the outside looking in, you can point to positives.  Here, it’s the goaltending.  Similarly, you can’t point out obvious holes.  The Wild have so many, they could be called the Minnesota Cheese.

What if… Rick Nash took over and played like the true superstar he should be?  Well, it would be nice to finally see.  He has the potential to be a top-5 offensive threat in the National Hockey League.  However, it still wouldn’t be enough.  This team is in real bad shape.  And probably will be for several years to come.  If you can actually name more than five players on their roster, you need to get out of the house more.

There you have it.  Agree or disagree?

Just please bookmark for later.  There will be a review in six months.

Season Preview with Pierre LeBrun of ESPN and HNIC