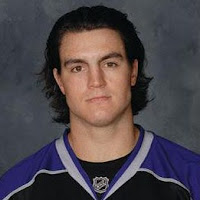 Earlier today I posted comments from Michal Handzus and Jarret Stoll following the Kings practice this morning in El Segundo.

Next up is Kevin Westgarth…

MM: Let’s get to the elephant in the room first. Everybody wants to know, we’re four games in and no scraps yet – what’s going on out there?

KW: There’s no takers, it’s tough sometimes. Especially, when you get down – guys don’t want to risk losing a fight to lose momentum for their team. I’m itching a bit, for sure. It’s all kinda part of the game, part of the line I have to walk anyway. You know, being a smart hockey player combined with being the guy that wants to show the fans, especially, that he’s willing to get out there and scrap if he has to. The moments haven’t really presented themselves. I’m trying to create ’em. But, I feel like our guys are still protected and that’s the most important thing. Nobody has done anything too stupid or too crazy, so I haven’t had to get over the line just yet. I have no fear that it will be coming!

Looks like the itch will have to wait at least another game, coach said you wont be playing against Carolina.  What were your thoughts when you heard the news?

You’re not really a hockey player if you don’t want to play every game.  But, I’ll take tomorrow and get a good work out in.  We have a lot of games coming up, so I know I’ll be back in the line-up.  I’ll be ready to roll when I get my opportunity.

Raitis Ivanans wasn’t in the line-up when you guys went to Calgary last week.  Heading into the game what were your thoughts about possibly having to square off with your former teammate?

Well, I kinda knew what happened.  I heard, I hadn’t seen the clip yet.  But, I’ve actually seen Mac (Steve MacIntyre of the Oilers) do it before (knock somebody out).  He’s a big, strong, tough guy and anybody can lose any fight at any point.  It’s too bad.  We all wish Raitis the best, of course.  I’m sure down the road he’ll be back and we might have a dance.  You never know what will happen.  But, we’ll both be ready – I’m sure.

Any thoughts on the strong play of Jonathan Quick so far this season?

He’s really let us play worry free hockey.  It’s nice to know to there’s not going to be any soft ones.  And even if they get a break, we know we have him back there to bail us out sometimes.

1 – As mentioned above, Westgarth will not play against Carolina tomorrow night (earlier today Coach Murray said he’ll replace Westgarth and Brayden Schenn with Kyle Clifford and Trevor Lewis).  So, looking ahead – assuming he gets back into the line-up Thursday night with the Coyotes…in the pre-season Westgarth met up with Nolan Yonkman, who has since been assigned to the AHL.  That same night (9/23), Clifford tangled with Paul Bissonnette (video here). Might the fans in Phoenix be treated to Westie vs. the infamous BizNasty on Thursday?

2 – To watch the Ivanans vs. MacIntyre fight video click here.

10 Tidbits on the Kings Home Opener – with a quote from BizNasty (who wasn’t even in the game!)