You are here: Home / Interview / Looking Back with Jonathan Bernier 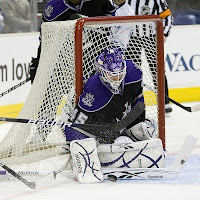 By now, even casual Kings fans know who Jonathan Bernier is.

However, the goalie of the future is still waiting for his chance somewhat. Sure, he set the world on fire last year in the minors – becoming the AHL Goaltender of the Year. Yet, here in LA, Jonathan Quick was having his own strong season and isn’t quite ready to give up his spot.

Still, Coach Murray has said the Kings are just as committed to giving Quick rest this season as they are Bernier starts. Thus, he isn’t expected to get the Ersberg treatment and only ride the pine.

In fact, the coach says his plan is to play Bernier about once a week. Looking at the upcoming schedule, that means his most likely next start is either in Wednesday’s home game against Carolina or the following night in Phoenix.

Before moving forward, we took a little trip backwards with Bernier and discussed the road that’s brought him here…

MM:  When you were drafted by the Kings in June 2006 the team here was a in a bit of flux.  They had just hired a new GM in Dean Lombardi and were about to go through several changes.  Going back to draft weekend, what did you know about the Kings at the time?

JB:  I didn’t know much.  They didn’t know what kind of team they were at that point.  Now we have an identity, as sort of a great defense team with a few stars – like Kopitar, Doughty and Brown.  Dean has done a great job of putting all the pieces together.

When you went into the draft that weekend were the Kings on your radar or did you have a few other teams in mind that you thought would probably be selecting you?

To be honest, I didn’t think at all about LA.  I had met with them at the combine and I wouldn’t say it wasn’t positive, but it was really short. I knew Tampa Bay was picking 15th.  So, if I was still available at that point, I was probably 90% sure they’d take me.  I was also thinking maybe Phoenix.  Then, one guy was taken ahead of me that wasn’t projected that high and it sort of messed up the draft.  It happens every year.

In your very first junior game (QMJHL), your brother scored a goal on you.  Knowing how brothers fight all the time growing up, was that frustrating to give one up to him or did you just laugh about it?

I was playing at the time with Jaroslav Halak.  He couldn’t start because he didn’t have his working visa.  So, I had to start several games and the first one was against Halifax and my brother.  I stopped a short breakaway and he was there for the rebound.  I just kinda laughed.  What are the chances that happens?  He gave me the puck at Christmas time as a joke.  We laugh about it now.  It’s a great memory.

From what I understand, your brother is playing in Europe now.  How’s he doing?

Yes, he’s in France.  He had a really strong year last year, coming off of a knee injury two years ago.  I think he finished as the top scorer in the league, which was a really big step for him.  This year he’s on the same team and he’s hoping to have another great year.  He likes the life over there and he’s getting ready to have a baby this year.  So, he’s pretty excited about things.

Nearly every player remembers their NHL debut as something special.  But, yours was even more spectacular, being that it was over in London (UK).  Talk about the overall experience for a moment and do you have any memories away from the rink in England?

It was pretty amazing to start that game.  It went really quick though.  It seemed like I was flying everywhere that summer – to LA for training camp, the game in Las Vegas, then we all flew to Austria and had another training camp over there..then, London.  It felt like everything lasted for a second.  I was nervous too, so it probably went quicker that way.  We didn’t have much time away from the rink.  However, one fun thing was the taxi on the boat. Our hotel was right by the water and we took a taxi boat to the O2 Arena for the game and practice.  That was unique.

Last year your call up was a little different than most also.  You knew about it weeks in advance – or at least that it would be coming soon – because Quick’s wife was set to have a baby.  When you finally got the call, what were some of the first thoughts you remember having?

With the season I was having, I felt really confident coming in.  You still never know how the team is going to play in front of you or how you’re going to play though.  Obviously, I was excited to be here and wanted to give the best impression I could.  It was the first time Terry Murray was going to see me play, so it was important to get a good start.  It had been two years since I had played in the NHL too.  So, I wanted to prove to myself that I could still play at this level.

Given that it had been two years, was it almost like playing in your first NHL game all over again?

I felt kinda the same.  I was a little more mature and more in control of my emotions.  I felt way more confident.  I think the biggest thing was I could tell out team was more solid than when I was 19 years old.  That was probably the biggest difference.

You came back up a few weeks later when Erik Ersberg strained his back, picking up two more wins – including a shutout against Nashville.  So, you were 3-0 and it’s no secret that Quick was struggling a little bit down the stretch.  Was there ever any serious talk about bringing up for the playoffs?

No, never.  That was a whole media thing.  I never heard anything.  Quick had done the job.  He brought the team to the playoffs and I don’t think there was any thought in Terry’s mind to bring me back up.

When guys like Steve Mason and Carry Price, two guys you know from Team Canada junior camps…when you saw them in the NHL having success, did it bother you?  Did you sit there and say ‘Hey, I’m better than those guys’…

Yeah (he laughs).  It’s tough.  Mentally, those are the type of things that are easy to say.  But, you try to remember that you can’t worry about what you cant control.  You always have it in the back of your mind.  When I see guys like that, that I’ve battled with, and they’re in the NHL, it’s tough.  Yet, I understand what Dean has been trying to do with me and it’s probably the best for me and the organization.  I cant really do anything about it other than every time I step in the net, just prove that I belong at this level.

From a goaltenders perspective, what stats are most important to you?  Do you look at save percentage?  Goals against?

It’s nice to see your save percentage high.  I think that means you’re consistent.  But, the first thing I look at is wins.  That’s what separates great goalies from good goalies.  You want to make the playoffs every season and more wins means you make it.  That’s what I focus on most every night, to come out with the ‘W’.

Let’s test your Kings knowledge – can you name five players that wore the purple and gold jerseys?

Rogie Vachon. (we laughed about him having to go goalie first).  Dave Taylor.  That’s about it.  I guess I’m not a real hockey fan – I just play the game.  (a lot more laughter)

Yes, he just plays the game.  And he does it well.  Very well.

Later this week he should get a chance to play again too.

High / Low on Game Two – Jim Fox stops by to talk about the Calgary game, Bernier’s only start so far

What to do with Martin Jones?