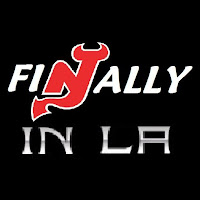 Later tonight Ilya Kovalchuk will rejoin the Kings for the first time since his visit to their training facility back on July 13th.

Only this time around, Dustin Brown, Jarret Stoll and Matt Greene probably won’t be as accommodating as they were during his last trip to Los Angeles. Having spurned the team for a better contract with New Jersey, he’ll be wearing a Devils sweater when he takes to the ice at Staples Center.

The entire summer romance – er, courtship – between Kings GM Dean Lombardi, Kovy, his agent Jay Grossman and all the parties involved has been chronicled to death. By now, everybody knows how it all turned out. Similar to the Rob Blake situation, fans appear to be split into two camps – some feel rejected (they’re angry), others are glad he didn’t sign here (they’re happy, or at least neutral).

We checked in with three well respected experts from ESPN and Hockey Night in Canada to get their take on the situation. Hopefully, they’ll be able to offer a little bit more of an impartial point of view…

QUESTION:  Any final thoughts on the Kovalchuk situation now that it’s all been wrapped up?

It seems to me like he’s a good fit in New Jersey. We spoke to Lou Lamoriello last year after he was traded there and he raved about how he had fit in and was excited to be there. From that perspective, I think it makes sense. I must say, I’m really happy the NHL jumped in though – in terms of the way the contract was structured. There have been too many cases where teams have front loaded all the deals. They haven’t circumvented the CBA. But, it’s not really in the spirit of the contract either.

One disappointment that I have is that the league waited so long to finally, officially interfere. I know they hired outside council to investigate the Luongo, Hossa, Pronger, Savard and some of the other so-called ‘cheat deals.’ But, they didn’t really officially reject a deal until the Kovalchuk one. Certainly, out of all of them, that’s the one that went too far. But, I do think if you’re Lou Lamoriello and you see Vancouver having a $5.3 million cap hit for Roberto Luongo, when you know he’s not going to be playing the last three years of that deal, it is hard to stomach that your franchise was singled out.  But, in the end, I’m happy it happened because I think these ‘cheat deals’ have really questioned the integrity of the system and kind of hurt teams that decided to not go down that path and signed deals that were in good faith and in-line with the actual rules.

QUESTION:  Are the Kings better off with Kovy or without him?

John Buccigross – ESPN  [taken from his season preview on MayorsManor]

It may not have turned out the way some expected, yet it’s finally here.  What many people waited for most of the summer.

Ilya Kovalchuk will be playing at Staples Center tonight.

This game should be interesting to say the least.

Pierre LeBrun – Letting the world in on his secret, he LOVES the Kings right now

John Buccigross – Only JB can smoothly mix the Kings, the Ducks and Run DMC
.