You are here: Home / NHL / Kings / Kings ‘Youth and Promise’ Has Familiar Ring to ‘Hawks 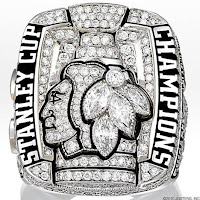 The team was coming off a run where they hadn’t made the playoffs since 2001-02. However, the roster was filled with promising forwards and a few stud defenseman, including one who will be a Norris Trophy finalist for much of the next decade. Which left goaltending as the only question. They responded with a 100-point season, their first in 17 years. Then, they made some noise in the playoffs, but eventually lost.

All was fine though. They had now ‘learned how to lose.’ Thus, the trendy pick among experts and prognosticators the following season was to say this was the team that would go all the way to the Stanley Cup Finals, perhaps winning it all.

No, that quick recap of history wasn’t about the Los Angeles Kings. It was the Chicago Blackhawks story in the summer of 2009.

Given the Kings striking similarities right now, you can see why many people are calling them things like ‘this year’s Blackhawks.’

So, when the two teams meet later tonight it will certainly be a measuring stick game.  Whenever a team faces the defending Stanley Cup Champions it’s a chance to compare your progress vs theirs.  This is a little more than that though.  It’s almost like a little brother testing his improving strength against an older adversary.

Not only did the ‘Hawks win the Cup last June, they also hold bragging rights over the Kings – winning the season series last year 3-1.  All-time, LA needs just one more win to even the series, currently sitting at 73-74-22 vs. Chicago.

Here are five other points of interest in tonight’s match-up:

* USA vs. Canada – at last year’s Winter Olympics there’s no doubt the two most exciting games featured these two countries…and the only NHL club to feature more players than the Kings or ‘Hawks on those two rosters was the San Jose Sharks…tonight won’t exactly be like reliving the gold medal game, however Los Angeles will suit up Americans Jack Johnson and Dustin Brown (Jonathan Quick will be the back-up and Drew Doughty is out hurt), while Chicago’s line-up includes Canada’s Duncan Keith, Brent Seabrook and Jonathan Toews – plus, Team USA’s Patrick Kane.

* Norris Trophy – it’s really too bad Doughty is injured…at the end of last season the ‘Doughty vs. Keith for Norris’ conversation was a great debate…tonight should have been the first time the two were on the ice together since the award was handed out…however, Doughty’s post-concussion symptoms will keep him sidelined until probably this weekend.

* Missing You – Toews and Johnson were almost teammates…they barely missed each other at Shattuck-St. Mary’s, the famous boarding school in Minnesota (where former Kings coach Andy Murray once coached)…Toews later joined the University of North Dakota (2005-07), just after Kings defenseman Matt Greene (2002-05) had left there to join the Edmonton Oilers.

* The Old Man and the Sea – Marty Turco, one of the elder statesman among NHL goaltenders this season will be in goal for the Blackhawks…at the other end of the ice, the Kings will start young Jonathan Bernier in net – his first ever career start vs. Chicago…last season Turco was 0-2-1 vs. the Kings – of course that was when he was with the Dallas Stars…all-time, Turco is 16-13-2 when playing Los Angeles.

* Special Teams – doesn’t it seem like most games always come down to special teams…for these two squads, Chicago clearly has the better power-play early on this season (they’re currently third in the league at 26.5%, vs. the Kings 14.7%)…on the penalty kill though, the Kings have the advantage – they enter the game fourth in the league, with a 89.2% kill rate…the ‘Hawks are currently 17th in that area, having killed off 83.3% when down a man.

There’s an old saying about ‘to be the man, you have to beat the man.’  A victory over the Blackhawks tonight wouldn’t crown the Kings champions of anything.  Yet, it would go a long way to further solidifying that this team is for real…and perhaps on their way to something special in the months ahead.

It’s usually pretty hard to defeat the defending champs.  To do it on the road…and to do it without your best defenseman…would be one of those games that feels like it was worth more than two points.