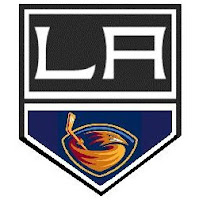 Away from the scoreboard, the Kings have been leading the Thrashers from day one.

In their 11-year existence, Atlanta has had seven captains – including three former Kings.

At the time Kelly Buchberger was named their first captain, he had yet to play in LA.  However, he served as the Oilers captain for the prior four seasons and why they made him available in the expansion draft is a bit of a mystery. Nonetheless, his jersey included the ‘C” when the Thrashers began play in 1999 and he rewarded the team by scoring the first goal in franchise history (against Bobby Holik’s New Jersey Devils, more on that later).

Just 68 games into his career in hot-lanta he was traded to Los Angeles (along with Nelson Emerson) for Donald Audette and Frantisek Kaberle.

Adding Buchberger was a key piece to the Kings three year stretch of post-season play.  He was allowed to leave as a free agent in the summer of 2002 and until this past April, the Kings hadn’t participated in the playoffs since.

Back to the Thrashers…Steve Staios wore the ‘C’ in Atlanta the following season and then it went to Ray Ferraro.

During the same years Buchberger was captaining the Oilers (1995-99), Ferraro was playing in in LA. The Kings had acquired him in what should be remembered as one hell of a trade for the team – they sent Jari Kurri, Marty McSorley and Shane Churla to the Rangers in exchange for five assets, including Ferraro, Ian Laperriere and Mattias Norstrom.

Immediately following Ferraro, the Thrashers captaincy went to Shawn McEachern, who played for the Kings during the 1994-95 season after being acquired in one of the most controversial trades in Kings history – coincidentally, also involving McSorley.

Following LA’s run to the Stanley Cup Finals in the Spring of ’93, they couldn’t come to contract terms with McSorley. So, the Kings did a rather unusual move at the time, a sign-and-trade deal with the Pittsburgh Penguins. Marty headed east and McEachern came to LA. Less than six months later the deal was basically undone when McEachern and Tomas Sandstrom were traded to the Pens in exchange for Marty and Jim Paek.

The four other Thrashers captains and their loose ties to the Kings:

Scott Mellanby (2005-07) – never played with the Kings, but did play college hockey with Tony Granato at the University of Wisconsin…also with Tocchet and Ron Hextall in Philadelphia; Bernie Nicholls in Edmonton; Sean Burke in Florida and Pavol Demitra in St. Louis

Sopel’s time in LA ended on February 26, 2007 when he was traded to the Vancouver Canucks for two draft picks.  The first of those selections, a second rounder in 2007, was used to take Wayne Simmonds.

Now, if Simmonds can somehow get a hat trick this evening, as the Kings beat the Thrashers 3-2 (with their goals coming from Sopel and Modin)…man, this whole thing would just wrap up perfectly.  Wouldn’t it?

Tuesday’s 10 Tidbits on the deal with the Devil(s)