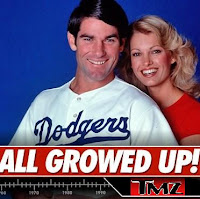 ﻿Among the many things that separate hockey from other sports are fans’ obsessions with jersey numbers. It’s just not something that the average baseball enthusiast, for example, makes a big deal out of.

Hockey is different though.

Earlier today the Kings announced number changes for their latest fab five – Jake Muzzin, Brayden Schenn, Andrei Loktionov, Kyle Clifford and Trevor Lewis (well, I guess that’s more like a fab four, plus Lewis)…anyway, as Vince Vaughn’s character, Trent, might say in the movie Swingers – the babies are all growns up.

Here are a few little historical tidbits on the changes:

* Schenn will wear #10 – this was previously worn by Terry Ruskowski (who served as the Kings captain prior to Dave Taylor taking over the C in 1985)…it was also the first jersey number assigned to to Bernie Nichols, before he eventually ended up with his more popular #9…Warren Rychel wore it during the magical ’92-93 season…Don MacLean wore it for his five game stint with the team in 1997 (coming off the training camp where he scored the first goal in Frozen Fury history)…and Steve Carlson wore it in the ’79-80 season – he’s better known as a member of the Hanson Brothers in the movie Slap Shot.

* Loktionov will wear #12 – yes, Patrick O’Sullivan wore that number too…however, it has at least two ties to Wayne Gretzky…Jimmy Carson, who wore it during his second tour of duty with the Kings, was part of the package sent to the Oilers in 1988 for Gretzky…eight years later, when the Great One was traded to St. Louis, the key piece in that deal was Blues top prospect Roman Vopat – who wore #12 as a member of the Kings.

* Clifford will wear #13 – becoming only the fourth player in Kings franchise history to wear that number.  The other three were John Zeiler, Michael Cammalleri and Robert Lang.  Incidentally, prior to KC taking the number, it was the least used number (below #40 and excluding the retired numbers) since the team’s inception in 1967…it now shares the honor with #36.

* Muzzin will wear #6 – other defenseman to wear that number for the Kings include Sean O’Donnell, Brad Stuart, Andreas Lilja, Dean Kennedy, Joe Corvo and Doug Houda…the closer Jake ends up being to guys near the front of that list, the better off the team will be this year.

Another famous number six in this town was Steve Garvey.  It’s also a number the Dodgers refuse to retire until he makes the Baseball Hall of Fame.  How lame is that?  Oh wait, we’re off topic again.

Prospect File – The Buzz on Muzz

note: to see a classic scene from Swingers, featuring an ‘all growns up’ line, click here.  Warning, contains some foul language.