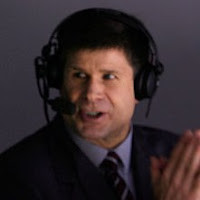 Kings’ Analyst Jim Fox was in the booth for both of the team’s games this weekend north of the border.

Yesterday he stopped by MayorsManor with his thoughts on the Canucks game. Fortunately, after a big win on opening night there was little to criticize.

Now, following the first loss of the season to the Flames on Sunday, he’s back with his opinions on the play of Dustin Brown, Jarrett Stoll, Wayne Simmonds, Jake Muzzin and Jonathan Bernier.

Sunday night was certainly less than a perfect ten for the Kings. Entering the game in Calgary they were 0-9 at the Saddledome since Christmas of 2005. Unfortunately, they added to the streak with a 3-1 loss.

Less than 24 hours prior there was plenty of praise being thrown around for players like Anze Kopitar and Jonathan Quick, following the team’s performance in Vancouver. Then, true to form in the NHL, the Kings found it difficult to win on back-to-back nights.

Here are Foxy’s three Highs and Lows from game #2:

[commentary from The Mayor]  Among the forwards, Brown was also second in total ice time (21:35), trailing only Kopitar (23:33).  Curiously, for the second night in a row, he wasn’t among the top-five forwards in power play minutes.

* Jarrett Stoll controlling the face-off circle – going 11-2 vs. the Flames

Last year, Stoll finished 10th in the league with a 56.0% for face-offs won.  Among players with over 1,000 face-offs taken, that ranked him 6th.  The only other Kings player to post a number greater than 50% was Michal Handzus (50.9%). Thus, that’s an important part of what Stoll brings to the team.

*  Jake Muzzin was active again – involved at both ends…knocked off the puck, but recovered well

Think about this for a moment – at some point in the game, five of the six players on the ice for the Kings probably included Bernier, Muzzin, Brayden Schenn, Kyle Clifford and Kevin Westgarth.  That’s a group that came into the weekend with a grand total of less than 20 NHL games.  The best news?  For the most part, that group has played pretty solid so far.  Although Westgarth was aiming for the newly named Poni-trick after taking minor penalties in the first and second periods on Sunday (see yesterday’s High/Low article for an explanation).

* Second “quiet” game in a row for Wayne Simmonds

Perhaps he’s just getting used to his new linemate.  For all that’s made of the Kings just swapping out Frolov for Ponikarovsky, truth be told, they’re different players.  Simmonds says he did lots of training over the summer, specifically focusing on his speed.  His 13 minutes vs. the Canucks was cut back to just over 10 minutes vs. the Flames, so he hasn’t much of a chance to show it off yet.  Worth noting though – of his 40 points last season, only five of them came after the Olympic break (just 2 goals and 3 assists).

The Kings didn’t look ridiculously horrible for long stretches vs. the Flames, they just didn’t have any real stretches of dominance either.  Not only were the shot totals low, but the overall energy level seemed to be missing.  I wouldn’t call it coasting, but they weren’t pressing the action for most of the game.  Hey, on back-to-back nights, it happens.

*  Although he looked real good most of the night, Bernier…re: Conroy’s goal, the bad goal hurts you more than the big save helps you

In a tight game…and in the second game in as many nights…you usually need your goaltender to be one of the two or three best players on the ice.  Like the team as a whole, Bernier didn’t play particularly bad.  He just didn’t have that ‘lights out’ game a team needs in these type of situations.

Prospect File: The Buzz on Muzz – players and executives speak out on Jake Muzzin