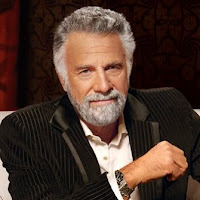 Dos Equis brings you inspiring stories from the World’s Most Interesting Man…we bring you the insightful information from the Man With the Perfect Hair.

Jim Fox was a frequent visitor to MayorsManor last year and was kind enough to provide his thoughts after the Kings big win in Vancouver last night.

Foxy appeared to be extremely frustrated with the Kings loss in last year’s season opener to the Coyotes. How did he see things last night?

Here are his Highs and Lows from the game…

Mayor:  For those worried that Schenn would only be getting “fourth line minutes”, he finished with over 14 minutes of ice time – more than both of his two linemates combined (Kyle Clifford had 7:15 and Kevin Westgarth had 5:03).  His totals also included 4:08 of power play time, more than Dustin Brown.  If that wasn’t enough, when Kopitar was injured in the second period, from one of the camera angles in the moments that followed, it looked like Schenn was playing trainer too.  This kid can do it all!  Perhaps he was just asking #11 for a few last minute pointers, as he was about to fill in for him on the top-line while Kopitar went off to get stitched up (more on that later).

FSW kept showing the graphic emphasizing how young the Kings are entering the season.  They played the game like anything but kids though.  Vancouver took the physical play to Los Angeles early and often.  While the score sheet shows both teams finished regulation with five minor penalties, there was no call on the stick to Kopitar’s face or the elbow to Clifford’s head, just to name a few.  No matter, the Kings played a controlled game and never appeared to be panicked or rattled.  They just kept plugging away and to borrow a coach’s favorite expression – ‘played their own game.’

FOX:  Anze Kopitar’s courage and focus after a nasty cut

Last week Kopitar was ‘Vegas’ due to his uncanny ability to rack up points at Frozen Fury (he entered the game the all-time FF points leader and added two more to his totals).  Last night, looking like Jack Nicholson’s Joker character from the original Batman movie, Kopi put on an inspired performance.  It seemed like he played the entire overtime period, while the Kings were on the power play, then added to the game’s drama by coming out and scoring a beautiful goal in the shootout.  Well deserved.

FOX:  Jonathan Quick’s focus all game and shootout save on Mayson Raymond

On NHL Live radio last week, Jim talked about the lack of respect Quick still gets, despite his strong play last year (when, as he noted, Quick set several team records in goal).  For the Kings to beat Luongo and the Canucks last night, you knew they’d have to get a strong performance in net…and they did.  The shootout save will be replayed quite a bit this week, maybe even for the next few months.

Gordie Howe has his own version of the hat trick – a goal, an assist and a fight in the same game.  Let’s just hope that Poni didn’t create his own version of a hat trick last night (the Poni-trick), by picking up a penalty in each period of play.  That wouldn’t be anything to brag about.  At least he mixed it up, always finding a new way to get a whistle – picking up calls for interference (first period), slashing (second) and boarding (third).

Game two is later today vs. the new-looking old Calgary Flames.  Lanny McDonald and Phil Housley weren’t available.  However, they have brought back Olli Jokinen and Alex Tanguay.

Jim Fox on Game Five of the Playoffs vs. Vancouver