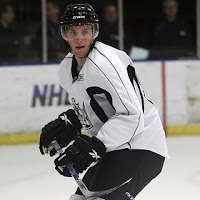 When you’re drafting an 18-year old kid it’s a gamble, regardless of the round.

However, when he’s 6-foot-5, plays defense, has an off the charts hockey IQ, has already won a gold medal with Team USA and was recruited to a college hockey program that’s won seven national titles …well, the odds are slightly in your favor.

It probably also doesn’t hurt that he’s from Minnesota – promoted as the State of Hockey.

Add it all up and it’s easy to understand why Kings GM Dean Lombardi was willing to trade a first and second round selection to Florida at this year’s NHL Draft just to move up four spots – giving him the ability to take Derek Forbort 15th overall.

While names such as the Ducks’ Cam Fowler and Erik Gudbranson of the Panthers may have received more buzz before the draft, it’s Forbort who some scouts believe may ultimately be the better player.

He recently began his freshman year at the University of North Dakota. The same school where Kings defenseman Matt Greene played three years and was the team captain when they lost in the NCAA Championship final to Denver in 2005.

Later tonight Forbort and his Sioux teammates will take on those same Denver Pioneers in a match-up of two teams ranked in the top-15 this season.

In the interview below he makes his inaugural stop into MayorsManor to talk about the games this weekend and give some thoughts on being drafted by the Kings – plus, he even helped clear up a little misconception that’s been floating around for a few months…

MM:  Let’s start off away from the rink.  So far, what’s been the hardest part about adjusting to college life?

DF:  Trying to eat healthy I guess.  We try to eat in the cafeteria every day so fast food doesn’t take it’s toll.  There’s nothing too bad about living on your own I guess.  It’s not like we’re preparing full meals in the dorms or anything.  Maybe just a little Easy Mac now and then to hold us over.

You’ve played one pre-season game at The Ralph (Ralph Engelstad Arena) a few weeks ago, but how excited are you for tonight and the home opener against Denver?

It should be fun.  The place was rockin’ for the exhibition game and I can only imagine what it’s going to be like when another WCHA team comes to town.

The Sioux had been ranked second for the past few weeks in the college hockey polls.  However, after two losses to Maine last weekend you guys fell from second to eighth.  How much do the players and coaches talk about things like that?

Not at all.  Nobody is thinking about anything like that right now.  We’re just focused on being the best team we can.  Wherever we’re ranked, we’re ranked.  It doesn’t really matter.

This weekend will feature another series versus one of the better teams in the country (Denver is ranked 12th) and they’re a conference rival.  They also feature a few players you played with last year.  How strange will it be to play against Nick Shore and Jason Zucker?

You’ve had five assists in six games.  How comfortable are you on the team and the system they play there at North Dakota?

Very comfortable. When I’ve had the puck I’ve tried to give it to Matt Frattin and just let him shoot. I’ve done pretty well, but I’m still getting used to how some of the guys play and how thing go when I’m out on the ice. But, it’s been a pretty smooth adjustment so far.

Brett Hextall (son of Kings Assistant GM Ron Hextall) is one of your teammates.  Did you find that you had a natural bond with him because of the Kings connection or do hang out more with the other defenseman?

We have a pretty close bond.  Of course, we talk about stuff other than LA sometimes.  Nothing too serious.  The d-core is all pretty tight though.  We all hang out quite a bit.

Going back to the draft, it was reported that you had a very short meeting with the Kings at the combine.  So, when they traded up to 15th were you even thinking they might be taking you or did you think they had their eye on somebody else?

I kinda thought they might take me because the interview went really well.  They told me if I was still on the board when they picked they’d want to take me.  So, I had a feeling something might be up.  But, you can never be sure.  Anything can happen.

A few days after the draft you attended the Kings Prospects Camp in Los Angeles where Kevin Gravel (drafted in the fifth round) was your roommate.  He’s a freshman at St. Cloud State this year, another WCHA school.  So, you’ll be facing him in early December.  How much do you know about the rivalry between UND and St. Cloud?

Well, I know about last year and the WCHA Championship going our way (beating SCSU in the finals).  They’re both good programs though.  We’re two really good teams and whenever there are conference points on the line we’re going to play hard.  So, it’s a good rivalry.

Given how busy you must be with school and hockey, have you had any time to follow the Kings or any of their minor league affiliates, like the Manchester Monarchs?

I haven’t really been able to watch anything.  Unfortunately, we don’t get the NHL package in the dorm rooms.  I’ve tried to follow the Kings on NHL.com to see how they’ve been doing though.

You wore #3 with Team USA.  Derrick LaPoint (senior) already had that number at UND, so you’re wearing #4 for the Sioux.  Are either of those your desired number when you turn pro and if so, is there any special significance?

It was just one of the lower numbers that was available.  A number is just a number.  I really couldn’t care less.

Alright, I have to ask… your NHL.com Draft Profile says that Man in the Mirror by Michael Jackson is your pump up song.  Please explain.  Really?

I don’t ever remember saying that.  I think one of my guys might have done that, one of my teammates.  Somebody was messing with me, pulling a little prank there.  That’s definitely not my pump up song!

So, set the record straight for everybody then.  What is your pump up song?

Raise Your Glass by Pink

[note: After further pressing, he insists he’s not joking – even adding “that’s a good one”]

NHL Central Scouting’s Jack Barzee says “He’s probably a top-two defenseman in the NHL if he reaches his potential.”

“I love him. I think of all those defensemen, he has the biggest upside. With his size and ability to move the puck, he’s still just scratching the surface of what he could be.” was the quote from a scout in The Hockey News Draft Preview 2010.

Finally, Hockey’s Future wrote “One of the most talented defensemen in the 2010 draft. Exceptional decision-making. Has the size and skating and is very agile.”

Dean Lombardi and his staff are obviously high on him too.

See for yourself what makes Forbort so special.  The North Dakota – Denver series will be on TV later tonight.  FOX College Sports will be broadcasting the game starting at 5:30 pm PST (channel 617 on DirecTV).  The game will also replay tomorrow morning on the NHL Network.