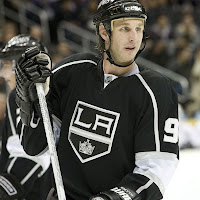 In 2007, Ryan Smyth made his Frozen Fury debut. Then with the Avs, he had a relatively quiet night, picking up two penalty minutes and posting three shots.

If his inaugural performance were to be rated as a Las Vegas hotel, it would probably be something on the outskirts – like, Boulder Station.

After skipping the ’08 affair due to an injury, he was traded to Los Angeles the following summer…which, as luck would have it, meant he would be returning for a second skate in the desert in September ’09.

Again, he missed two minutes of the game while observing from the penalty box. However, he upgraded his ranking by assisting on Anze Kopitar’s game tying goal midway through the second period.

This year, he’s looking for something a little more grand when the Kings take on the Avs again at MGM. Is a goal finally in the forecast?

We’re less than 36 hours away from the drop of the puck and the excitement is building.

It’s time to check in with Rhyno and get his take on the game this weekend, plus his thoughts on Dustin Brown, Wayne Simmonds and Kevin Westgarth…

MM:  You’ve seen this game from both sides.  Does either team, or even you as a player, view it as just another preseason game?

It’s definitely different playing in another building, other than an NHL rink. Obviously, being in Vegas there’s a lot of stuff going on.  It’s pretty loud in that rink too, so the excitement is there.  It makes for a fun night.

Over the years some of the younger guys have mentioned being a little overwhelmed at Frozen Fury because of all the hoopla.  There are only a few rookie forwards making the trip this year – Clifford, Loktionov and Schenn.  What type of advice would you have for any of the first-timers?

You just try to tell them to play their own game and do what they do best that got them here.  A lot of the younger guys now, they have a good head on their shoulders.  They understand and know what it’s like to play in different buildings, for the most part.  The young kids play in louder buildings nowadays, from juniors to college.  So, they’re used to it.

The Kings brought a tremendous number of players to camp this year.  Is there anybody in particular you’ve been watching to see how their game has developed since last year’s camp?

I was looking forward to seeing Brayden Schenn.  Early in camp I didn’t get a chance to be on the ice with him that much, but I got to see more and more as things moved along.  Some of the other kids that I was skating with are quick and really like to push the pace, which is great too.

In terms of linemates, most people expected you to be back with Kopitar and Williams this year.  Then, when camp opened things were mixed up a bit.  Was that a surprise and do you have any thoughts so far on having Dustin Brown on your line?

Whatever coach wants is best for the team.  He’ll see how it is.  I like how our chemistry has been in camp so far and hopefully we continue to duplicate it going forward.  We’ve added a few guys to the mix, like Ponikarovsky.  So, you don’t really know what’s going to occur until the season starts and until you get into camp.

When Williams was hurt last year you had a chance to play a bit with Wayne Simmonds.  What do you think about his ability to eventually be a top-six forward in the NHL?

I like his style.  I like how he isn’t afraid to get in the corners.  He grinds it out.  He has the speed and he has the thought.  He thinks the game really well.  Most importantly, he plays well in his own zone.  I think he was our top +/- player last year, among the forwards.  He understands the thought process of a game and the direction of a game – like the give-and-go’s, the little things.  He has that opportunity.

So much has been made about the goaltending and the five-on-five scoring last year, what about the toughness?  When you see a guy like Kevin Westgarth and the level of energy he brings to a team, do you think perhaps that was something the Kings were missing last year?

I think Ivanans did a half-decent job.  It’s tough to be a fighter in this game.  Recognizing the situation, I think guys do it really well.  I think Kevin Westgarth has done an excellent job over the summer and worked on his game also. Before camp started, we were skating earlier and I was really impressed with a lot of things he had worked on from the last camp I saw him.  I’m sure he has seen (the departure of Ivanans) as an opportunity and wants to take full advantage of it.  But, it’s a tough job to do.

Westgarth will get another chance to impress Smyth, as well as the Kings coaching staff, this Saturday night in Las Vegas.  Given his role, and his history with the Avs, it would have to be considered shocking if he isn’t able to find at least one dance partner over the three periods of action.

As for Smyth, he’ll be looking to continue building on that chemistry he’s developing with Brown.

He’s had it with Kopitar from day one of last year’s camp.  The bro-mance between those two was evident from the first time they hit the ice together.  Kopi and Rhyno were laughing and smiling like two kids in a candy store.  Heck, they were probably even finishing each other’s sentences.

It was quite the sight to see.

If the Kings can muster up another Frozen Fury victory this weekend, the players on the ice won’t be only ones having a good time.  Most of the 10,000 or so fans that pack the Grand Garden Arena will be high-fiving as well.

Click the player’s name to see what they had to say:
Anze Kopitar  –  Drew Doughty  –  Richard Clune  –  Jack Johnson