You are here: Home / NHL / Kings / Comments from the kids – Muzzin and Clifford 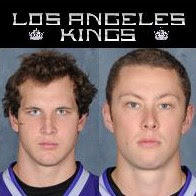 As announced yesterday, Kyle Clifford will return to the line-up tonight against the Carolina Hurricanes, after sitting out the last two games.

Defenseman Jake Muzzin will also play again. He’s played in every game so far this season.

Both players spent last year in junior hockey and were recognized in the OHL Coaches Poll for their strong defensive game – Muzzin was voted the top Defensive Defenseman and Clifford was the Best Defensive Forward. So, you can understand why coach Terry Murray feels comfortable with them in the line-up.

However, neither might be here much longer. Matt Greene is expected to return soon on defense, forcing the Kings to make a decision on (most likely) either Muzzin or Davis Drewiske. Clifford’s situation is a little more delicate. They can’t keep him past 10 games without eating a full year of his entry level contract.

Thus, he’s likely headed back to juniors soon. That’s not a knock on his skill – he’s a power forward in the making. It’s simply a numbers game (and a position thing) with the current Kings roster. We’ll see though.

A solid game from either tonight could make GM Dean Lombardi and coach Murray reconsider things.

Below are Clifford’s thoughts on returning to game action…plus, some extra comments from Jake Muzzin on how he’s enjoying his NHL experience so far.

MM:  How excited were you to get the news that you get to play again?

Clifford:  You want to get as much action as possible.  So, it’s exciting.  It’s the NHL, but it’s still the beginning – that first-time excitement is still there.

The veterans obviously already have a base of knowledge regarding the opponent, the players, etc.  As a new guy, how much extra scouting or preparation do you do in a situation like this to familiarize yourself with the other team?

I don’t really know many of the players that well.  So, I go over things with a few of the veteran players.  For example, I spent some time with Greener (Matt Greene) going over some of their players and what they bring.  I’m just trying to prepare myself as best as possible.

Let’s switch over to Muzzin…

Muzzin:  It’s definitely a fast league.  The guys are highly skilled.  So, you have to be ready every game.  You have to be in position every game.  You cant be out of position or they’re going to make you pay for it.  I think I’ve handled it ok.  The first couple of games I was a little nervous, obviously.  I’m starting to get more comfortable with the puck, skating with the puck, joining the rush.  Hopefully it continues.

MM:  Besides the speed, which everybody talks about, what other differences have you noticed…say, between what you saw in the pre-season and then now the regular season?

Not so much.  The pre-season is a little slower, the guys aren’t going as hard as usual.  The guys are coming hard now, they hit harder, the passes – you have to be quick so you have more time with the puck.  You just have to be ready.  You can’t go into these games just going through the motion or you’re going to get made.  They’re going to beat you.

Both guys will be ready tonight.

The question is, how much longer will they be here?