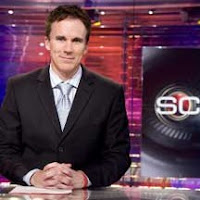 All week long we’ll be talking with people around the world of hockey to get their take on the upcoming NHL season. Prior to posting my predictions later this week, we’ll check in with experts from places like Hockey Night in Canada and USA Today.

Kicking things off though – making his second trip into MayorsManor – is ESPN hockey guru John Buccigross.

Last summer, Buccigross endeared himself to Kings fans while hosting the inaugural HockeyFest at LA Live, when he proclaimed the team would be returning to the playoffs. Then, he backed off those statements just a few weeks later in his ESPN article. So, of course, he was a natural to bring in last fall. Kings fans wanted answers on his about face. To his credit, he owned it, admitting he wasn’t sold on their goaltending.

Of course, the Kings did make the playoffs. In the article below we’ll see what he thinks about that, as well as look at some of the burning issues around the Pacific Division.

MM: After flip-flopping your opinion on the Kings and then seeing them in the playoffs, what do you think was the big difference for them and why did they end up having such a good regular season?

JB: I knew they would be right three. Anytime you talk about the playoffs, those 8-12 teams on your predictions can really be interchangeable. It’s tough to figure out. However, to be 100 point team like they were was really impressive. They had a solid goal differential, they were able to put the puck in the net. They played well defensively, only giving up just over 200 goals. In the end, they came together.

I definitely sensed something there at HockeyFest. You could sense a togetherness, a purpose – led by Dustin Brown. It was very impressive. I probably didn’t realize that Drew Doughty would really establish himself as one of the best defenseman in all of hockey, as quickly as he did. Maybe that was a bit of a surprise.  Perhaps that was worth a few points.

I just didn’t think the goaltending was going to be there. And you still have to wonder is this the goaltender that’s going to win them a playoff series – assuming Jonathan Quick is still the guy. They had balanced scoring last year, including a good year out of Handzus. Just an all around solid team. Which was reflective of the aura I got at HockeyFest. I don’t know why I backed off on that. It’s a good young team. They should be good again and they should make the playoffs again.

Staying with the Kings for a minute, you’re a big music guy and there are several musicians who frequent the games in Los Angeles.  Let’s take three – who is the better of these artists – Rob Zombie, Sugar Ray or Bad Religion?

I’ll go with the Zombinator.

Now, the Kovalchuk drama dominated much of the hockey headlines this summer. Are the Kings better off with him or without him?

For the last few years San Jose has been looking for the missing piece to put them over the hump.  Is having Antti Niemi in goal going to be the player to do it?

I don’t think so.  Not saying he can’t, I just don’t know if goaltending was always the issue.  Although, Nabokov never carried them all the way.  I think it’s more than that with that team.  Can that core get it done?  Are they dynamic enough in the playoffs?  Are they constructed, individually, as playoff players?  And do they have enough of those?  Dan Boyle has been there, I love him.  He’s a guy that could contribute greatly to a championship team.  But, honestly, it comes down to Thornton and Marleau, and now Setoguchi and Pavelski to step up.  You need great goaltending to win a Stanley Cup.  Niemi could provide that.  Yet, his track record still isn’t long enough.  A lot of guys have come into the league and done pretty well for a year or two.  Can they sustain it?  We just don’t know.  We don’t know if he’ll be in the league six years from now or not.

Marc Crawford could be on the hot seat in Dallas.  Will he make it the whole year without being fired?

They’re in transition, with a decent young team.  But obviously they’re moving forward and they keep losing pieces, great players like Modano and Zubov.  That core got older and moved, now they need to replace it.  They have some good young players, like James Neal – he’s a real good one.  When it comes to firing the coach, a lot will depend on their finances.  They might not want to fire a coach, have to pay him, and still still have to hire somebody else.  If I had to guess, I would say he’d survive the year.  This doesn’t seem like a team that is expected to go anywhere.

If you could only have one of these three Ducks, who would you take – Ryan Getzlaf, Corey Perry or Bobby Ryan?

They all bring kind of a unique flair.  I love Perry and the way he plays.  But, when you can get the big center, because the center position is so important in hockey – in terms of a guy who can set people up, who is big, can make a check, play a little defensively, shoot a one-timer on the power play, etc.  Then, Ryan Getzlaf, that big center, is the guy you’d usually have to go for.

In our last interview you said if you were the NHL Commissioner for a day, you would implement a ten minute, four-on-four overtime.  The NHL looked at several rule changes over the summer at an R&D camp in Toronto.  Were there any rule changes you liked there?

A little tweak here or there would be fine.  I’d just like to make the shootouts as special as possible.  That’s why I’d like to see more of the four-on-four.  There’s times where it’s really exciting, when they go back and forth.  But, maybe the five minutes helps make it exciting, because it is more of a sprint.  Unfortunately, you’re seeing people send defensive players over the boards over and over again, to play for the shootout.  So, maybe with 10 minutes, we’d see too much of that.  Or, maybe if you add five more minutes, those guys would get tired and you’d get more offensive players playing.  Then we’d be watching a more true version of four-on-four hockey.  It just seems like teams are playing defensively and trying to control the game via the shootout.

Overall, the league is pretty good right now.  If they just keep it fluid, keep calling the clutching and stuff, keep it a fast, young mans game, it will keep things exciting.

Run-DMC is one of your favorite groups of all time.  So, how about assigning one of their songs to each team in the Pacific Division…

The King of Rock song is the first one that comes to mind.  If you look at the division right now, you’d probably pick San Jose as the King of Rock…(click here to listen to him rap a few lines from it). They’ll still be the favorite in the division.

You Talk Too Much, I guess you could probably give Anaheim that song.  You know Corey Perry likes to yap and even Getzlaf will yap a little bit.

For the Kings, I’d go with Walk this Way.  (to hear the explanation, click here and let him tell it)

I’m not sure Phoenix and Dallas deserve a DMC song right now.  Maybe we’ll give them a Celine Dion song.

The Mayor’s predictions for the 2010-11 NHL season