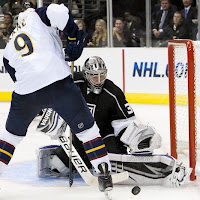 Last night the Kings opened their home schedule with a 3-1 win over the Atlanta Thrashers.

It was the first time the two teams had met since Friday the 13th, last November. The Kings were as unlucky as you can get that night…or they were just really, really bad…losing to the Thrashers 7-0, their worst loss of the season.

This game was bound to be different, as the three stars from that blowout game would not be a factor in the rematch. Thrashers goalie Ondrej Pavelec (the first star) is currently out of action after a fainting spell. Additionally, Ilya Kovalchuk (second star) is now with the Devils and Maxim Afinogenov (third star) is playing in the KHL.

Below are 10 Tidbits surrounding this year’s contest:

* So far, the motto for this year’s Kings team could be ‘Third Period’s a Charm’ – in the three games played, all of their goals scored have come in the third period. Conversely, they haven’t given up a goal in the first period yet.

* Throw out the empty netter and you have to ask, how does a team scoring four goals in three games have a 2-1 record?  Simple, strong goaltending. Jonathan Quick has started two games.  He’s been the first star in each of those.  And they’re the two games the team has skated away with wins.

* Ryan Smyth did it for the kids – see yesterday’s post.

*  The new red line at Staples Center made its debut – no, not the MTA red line…the red line on the ice – it now features a white silhouette of the Kings crown (as part of the checkered pattern).

*  Jack Johnson is a perfect 3-0…as in three straight games with at least one penalty (roughing, interference and closing his hand on the puck).  On the flip side, Alexi Ponikarovsky took a penalty in each period of the season opener in Vancouver (the aply-named ‘Poni-trick’).  Since then, he has yet to be whistled for an infraction.

*  Willie Mitchell picked up his first point as a King, assisting on Jarret Stoll’s game winning goal in the second period.  Due to missing the second half of last season with post concussion syndrome, this was Mitchell’s first point since January 16, 2010.

*  How has Brayden Schenn not scored yet?  Official stats show he has eight shots on goal in his 38 total minutes of ice time through the first three games.  However, it sure seems like he’s had about five quality chances per game.

*  Chris Thorburn scored the Thrashers lone goal.  Then, the always quotable Paul Bissonnette of the Phoenix Coyotes tweeted this after the game – “Chris Thorburn is a gem. Still talk to him after games when we play each other. He doesn’t swear. He says frig instead of f-bombs. Good Christian boy from the Soo.”  Leave it to BizNasty to provide a quote on a game he wasn’t even involved in.

Next up, the Vancouver Canucks come to town Friday night.  Yep, those guys again!