You are here: Home / NHL / Kings / 10 Tidbits on Mattias Norstrom 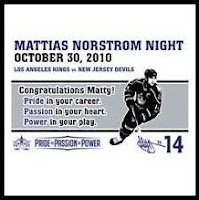 He never won the Stanley Cup. He only scored 14 goals with the team. He made a single appearance in the NHL All-Star Game. And there are very few, if any, truly defining moments from his 11 years in Los Angeles.

Yet, Mattias Norstrom will forever be remembered as the Captain of the Kings.

He’s back in town to be honored in a special ceremony prior to tonight’s Kings-Devils game at Staples Center. Along with his family, several former teammates will be on hand to share a few stories and pay tribute to one of the toughest players in franchise history.

*  A native of Stockholm, Sweden, Norstrom was drafted by the New York Rangers in the second round of the 1992 draft (48th overall). With the pick immediately following his selection, Tampa Bay took Brent Gretzky (Wayne’s little brother) – who went on to play a grand total of 13 NHL games. Nine slots before Norstrom was chosen the Kings opted for Justin Hocking, who played a total of…wait for it…ONE game in the NHL.

*  Another note that somewhat links him to Gretzky is the fact that it was after Wayne was traded by Los Angeles to St. Louis on February 27, 1996 that a Kings fire sale soon began.  During that process, veterans Marty McSorley, Jari Kurri and Shane Churla were packaged to the Rangers in exchange for three players and a draft pick.  One of those heading west was Norstrom.

*  As if that wasn’t enough, it was 11 years to the day – February 27, 1996 – that he was traded out of LA.  Kings GM Dean Lombardi saw an opportunity for a win-win situation by trading Norstrom to the Dallas Stars.  The aging veteran could get one final shot at a Stanley Cup and Deano could pick up a few coveted assets, such as a 2008 first round draft pick (which was eventually used though a series of deals with Anaheim and Buffalo to ultimately land the Kings a big WHL defenseman named Colten Teubert)

*  His ties to Rob Blake are slightly more substantial than Gretzky.  First off, he was the Kings captain from 2001-2007, a time period that was sandwiched between Blake’s two tenures with the ‘C’ in LA (1996-01 and 2007-08).  Norstrom was also the first European captain in franchise history (and to date, the only one!).  Slovak Peter Stastny was the first European-born and trained player to become captain in the NHL (Quebec Nordiques from 1985-90).  In 2008, fellow Swede Nicklas Lidstrom of the Detroit Red Wings became the first Euro-captain to lead a team to the Stanley Cup.  Don Cherry must have been proud.

*  Soon after Blake signed a free agent contract with the Kings in the summer of 2006 it was reported that Norstrom called his returning teammate to offer him the ‘C’ back.  Blake refused, saying that Norstrom was the “soul of the Kings.”

*  Norstrom played 780 regular season games with the Kings – ranking him second all-time among defenseman (behind only Blake) and fifth overall in franchise history.  In his NHL career he totaled 903 games collectively when you add up his time with the Kings, Dallas Stars and New York Rangers.

*  In a January 2006 article with Larry Wigge for NHL.com, Blake – a member of the Colorado Avalanche at the time – said “Matty was the perfect partner.  He was a presence in our own zone and gave me the freedom and encouragement to take chances in other areas up the ice.  I wouldn’t have won the Norris Trophy if I was playing defense with anyone else.”

*  Respect All Around – In the same article, Jeremy Roenick said Norstrom “is the most underrated player in the league, bar none.  He’s tough as nails to play against.  He never let’s up…He’s in your face anytime you step anywhere near the Kings goal crease.”  Luc Robitaille added “Matty is the ultimate warrior.  He takes a beating and gives you a beating.  There is no fear there.”

*  International Experience – Played for his native Sweden in the 1998 and 2002 Winter Games.  Was also invited to play on the 2006 team, but missed the event due to an injury.  He returned to the team this past February in Vancouver – this time as an assistant coach.  Although his teams never medaled at the Olympics, he also played in five IIHF World Championships – picking up a gold in 1998 and twice winning silver (after losing to Canada in a best-of-three series in 1997 and again in 2003 when they were beaten by former King Anson Carter in overtime).

Bonus Trivia Question:  Three players on this year’s Kings roster actually played with Norstrom in Los Angeles.  Dustin Brown and Anze Kopitar are the two obvious ones.  Can you name the third player?  [answer at the end of this article]

Even Hall of Fame writer Jim Matheson wanted to get in on the action.  Just this morning, the long-time Oliers beat writer tweeted “Nice gesture by the Kings to bring one of the game’s solid warriors back. Norstrom was hard-nosed, game-in, game-out player.”

Forever a Warrior – Matty Norstrom, we salute you!