You are here: Home / NHL / Coyotes / What to do with Martin Jones? 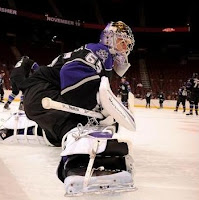 One game doesn’t make a career. He isn’t a bust. The Kings shouldn’t trade him.

Just sayin’ – he sure hasn’t risen to the occasion when there’s a crown on his chest.

I interviewed over a dozen players selected at this past June’s NHL Draft. Every one of them who played in the WHL listed Martin Jones as the toughest goalie they had ever faced. His teammates from the Canadian contingent at the World Junior Championships sang his praises. In April he was crowned the WHL goaltender of the year.

Rewind to last September, when the Kings met the Coyotes in game one of their annual two-game rookie series. Final score, 6-1 Phoenix. Jones suffered the loss and gave up all six goals.

After that game, he had the following to say of his performance “It’s hard to bring a bunch of guys together and try and get them game ready in a week and try and get chemistry going…In a game like that you need your goalie to make a save, keep you in it early and I don’t think I did that tonight”.

Fast forward twelve months, this time it was the late saves.

In game one of this year’s doubleheader between the same two teams, Jones gave up four goals – including three in the third period…with the final one inside of two minutes left in the game.

Jonathan Bernier will play in Los Angeles this year.  Thus, everybody is expected to get a bump up.  Jeff Zatkoff moves from the Monarchs back-up to the starter.  Jones was then to slide in as his understudy.

Which brings us to 19-year old JF Berube.  The Kings fourth round selection in the 2009 draft has played the last two seasons with the Montreal Juniors of the QMJHL.

Last September, he was more than solid in the LA-Phoenix series…shutting out the ‘Yotes 4-0 in the second game, earning the Kings a split.

And guess what?  He’ll be back in net on Wednesday, looking to help the Kings close out the series with a win for the second year in a row…this time for a sweep

Even if he stands on his head again though, he’s still expected to be back in the ‘Q’ this season, minus a few week absence over the Christmas break (he’ll be joining Team Canada for the World Junior Championships in Buffalo, NY).

Which gets us back to the original question.  What to do with Martin Jones?

Ah, relax.  It was only a glorified scrimmage.  He’ll be just fine, right?

2009 Rookie Game Two Recap – Coyotes turned away, not on the list