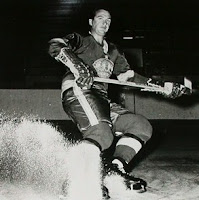 During the offseason we’ve brought you many interviews with players from throughout Kings history – guys like Hall of Famer Marcel Dionne, Brian Kilrea (scored the first ever goal in team history) and Noah Clarke (first Southern California born player to score a goal with the team).

Today, we take another look at a guy from the inaugural season – Eddie Joyal.

With pre-season set to officially start later this evening, it seems appropriate to review what he did while wearing the purple and gold…and why there’s an award named after him.

In the summer of ’67 there were certainly plenty of questions heading into the King’s first training camp. Different than a team of high-end ‘assets’ like Dean Lombardi has spent the last few years acquiring here in Los Angeles, it was a bunch of ‘miscellaneous parts’ at that point.  As an expansion team, Jack Kent Cooke’s upstart group was a hodgepodge of pieces acquired from the original six teams; plus some free agents, misfits, leftovers, cast offs and other assorted guys on skates.

After a few weeks of drills, scrimmages and just a general getting-to-know-you atmosphere at their training camp in Canada (a far cry from their LA-based training facility enjoyed by the current team), it was time for the Kings to play their very first pre-season game on September 18, 1967.

While the results were less than impressive (they never led in the game and eventually lost 7-3), a name that was soon to become extremely popular with the initial group of fans showed up twice on the score sheets that night. Netting two assists in the game was one of the King’s first real superstars – Eddie Joyal.

Wearing #16 a few years before Marcel Dionne made it famous in LA, Joyal went on to net 23 goals during the inaugural campaign and added 34 assists to lead the Kings in points. He followed that up with 33 goals and 52 points, both team highs during the Kings second season.

As a tribute to all he did for…and all he meant to…the first group of guys who ever proclaimed “We are Kings”, MayorsManor introduced the Eddie Joyal Award in September 2010, to be earned by the Kings player tallying the most points during preseason.

Sure, the exhibition games mean little in the big picture. However, it certainly meant something to Eddie Joyal in September of ’67. And it still means something to some Kings fans.

As summer winds to a completion each year the diehards look forward to the start of training camp and all that comes with it. The first look at some draft picks, speculating on line combinations and debating where the team will finish the season – all topics of delight for hockey starved fans in LA.

Equally important is the feeling of hope that hangs heavy in the air. Hope that the sum of the Kings parts will equate to having a chance to win most nights.  Eddie Joyal was part of that early hope in Los Angeles.

Before he led the Kings in points during that first season, he had two helpers in the first preseason game.

Last year, Anze Kopitar won the Joyal Award after leading the team with eight points during preseason, coming on five goals and three assists. Perhaps even more impressive was that he did it while playing in just 5 games. The Slovenia native just edged out American Jack Johnson and Canadian Wayne Simmonds for the award.

Perhaps it was an early look at what Simmonds had in store offensively.  Coming off his rookie season the prior year, where he posted nine goals, he averaged nearly a point a game during last year’s preseason – including tying Kopitar for the team lead in goals.

So, who will win the award this year?

The Kings are playing only six exhibition games this time around (two fewer than last year), including split-squad games against the Coyotes tomorrow night.

Kopitar, Simmonds and Johnson will all be at a disadvantage this time around, as they didn’t travel to Colorado for tonight’s first contest.

For that reason, using only guys that will face the Av’s – thus, giving them at least a mathematical chance to play in all of the preseason games – here are my odds on five players with a shot at winning the award this season:

As stated, Kopitar didn’t play in all the games last season and still won the inaugural Eddie Joyal Award.  Perhaps he’ll do it again.

We’ll know late in the evening on Sunday, October 3rd…after the Kings wrap things up with a game against the Ducks.

Pick your player now.  The betting window closes when the puck drops in a few hours.