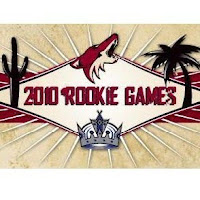 Cross referencing the Phoenix Coyotes rookie camp roster with the HockeyFights.com database, there doesn’t appear to be anybody who’s had an official scrap with the Kings Kyle Clifford.

In just a few short hours, that should change.

For the past few years the Kings and Coyotes have made it a point to test each other’s rookie squads with a few “games” near the end of the camp.  Don’t think for a minute though these are just glorified scrimmages.

Coach Ray Edwards was on the Coyotes website earlier today talking about how serious they’re taking these games, saying “We want to win.”  And that’s all nice and dandy.  However, a few of the Kings kids may have more on their mind that just a simple victory.  They were embarrassed last year in a 6-1 loss when the Coyotes came to LA (the series alternates location each year).

Clifford may be just the guy to help them out.  The former second round draft pick is coming off back to back OHL seasons with at least 110 penalty minutes.

In the annual OHL Coaches Poll a few months ago, he was voted the best defensive forward in the Eastern Conference and second in the ‘Hardest Worker’ category.

Currently, he’s fighting for a shot to make the Kings roster this season – something many people believe he’ll do.

With game one of the two-game rookie series set to take place later tonight, we checked in with Clifford to see how camp is going so far and talk about the team’s preparation for the Coyotes.

MM:  How did things go over the weekend for you, getting back on the ice with all the other prospects?

KC:  It’s the first time that most of us were getting into intense practices, so most of us were just working on getting out the rust and preparing for these next two rookie games.

You’ve been to a few camps here in LA now, however this one started off with a unique twist.  Was it distracting at all to have 2,000 fans roaming around the facility on Saturday during HockeyFest?

No.  Actually, it was pretty nice to see how big of a turnout it was and how much support the Kings really have with their fan-base.

You’ve met most of the pros already.  However, knowing that the whole team would be in town this weekend, was there anybody you were looking forward to spending a few minutes with?

Any time you’re around a guy like Ryan Smyth it’s good to get a few minutes in with him.  He’s been around the league a long time and you can learn a few things.

Is that a situation where you’re an outgoing guy and you ask him for tips and pointers…or are you the type of person that sits back and observes, just taking it all in while other people are talking to him?

A little bit of both.  As a younger guy coming in, you don’t want to be a mouthy guy.  So, I just kinda stay back and observe.  When I get a chance, maybe get a couple words in here and there with him.

Along with Schenn and Loktionov, you are one of the guys that a lot of people think have a legitimate shot at making the Kings roster this season.  Does that add any extra pressure to you as you go through camp?

There’s definitly pressure for any player here, it’s an NHL camp.  But, I try to keep all that on the back burner and focus on what I have to do out there on the ice.  I just have to keep a level head.

Specifically, there appears to be an open spot on the fourth line that you can reach out and take.  Is that where you see yourself or do you think you have more to offer than just maybe four to six minutes a night at this point?

Everybody has to start somewhere and just pay there dues, any league or any team.  You have to start at the bottom and work your way up.  It might be a long process, but there’s a lot of great players here (in camp) and some returning players.  So, if that was the case, on the fourth line, I definitely wouldn’t be disappointed.

You spent some time in Manchester after Barrie was eliminated from the OHL playoffs.  However, Kevin Westgarth was out with a hand injury when you got there.  If you did make the fourth line in LA this year, he’d probably be right there along side you.  Any thoughts on that?

Yeah, I didnt really get a chance to play with Westie because of the hand surgery.  But, I’ve talked to him quite a bit.  He’s a great guy to have on your team and he’s a feared force out there.

What type of preparation have the coaches gone through with you guys?  Do you approach this like a regular game – where you scout the other team – or are things more subdued for what are basically two scrimmages?

Well, we want to come out of the two games with two wins.  So, the last couple of days we’ve been going over the Kings systems and their power plays, neutral zone, defensive (schemes)…all sorts of different scenarios.  We’ve looked at video too.  There is a lot of hype for these games, so we’ve been preparing for them (like real games).

There aren’t very many OHL players on the Coyotes rookie roster this year.  Do you know any of the players they’ll be suiting up?

Not too many.  Not really. No.

By tomorrow, that will change.  Expect Clifford to dance with at least one, if not a few of them, tonight.

For what it’s worth, he’s scheduled to play opposite Brandon Kozun, on a line centered by Andrei Loktionov.

Unlike his fellow winger, Kozun knows a few of the Coyotes prospects pretty well – with two of his former Calgary Hitmen teammates suiting up for the Desert Dogs.  Just don’t expect him to play too physical of a game though.  At 5′ 8″, he’s a fast, highly skilled player…and the guy who led the WHL in scoring last year.

So, maybe Clifford can help clear some room for him out on the ice tonight.

2010 Camping Guide with Corey Elkins – an interview with the Kings prospect, coming off his rookie season in Manchester where he led the team in scoring